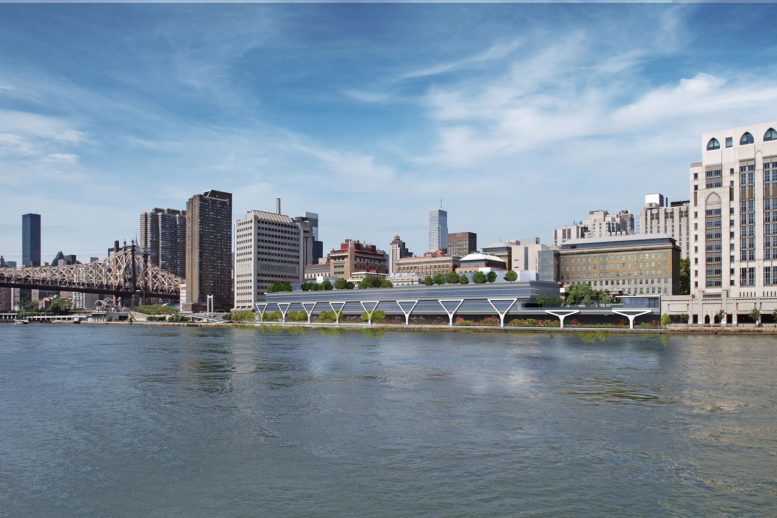 “The closure will accommodate repairs to pipes that drain rainwater from the FDR Drive and the East River Esplanade into the East River. During the course of the River Campus construction, the university discovered that these pipes were badly deteriorated,” the university’s website said.

“Rockefeller has agreed to make repairs to this critical city infrastructure at its own expense, and has established an aggressive construction schedule that will minimize the closure of the esplanade and complete the work during winter months when the traffic on the esplanade is at its lightest,” it continued.

Rockefeller’s project isn’t the only large academic expansion in the area. Cornell University’s tech campus on Roosevelt Island is highly visible to drivers on the FDR Drive. Those same drivers have been driving right under Rockefeller’s construction site for months. Thankfully, prolific construction chronicler Tectonic posted this photo of the work to his Flickr page. It shows construction is humming along. The design by Architect Rafael Viñoly’s firm is already evident. Eventually, so will the work of Mathews Nielsen Landscape Architects.

The expansion will add two acres to the campus. The centerpiece will be the new Marie-Josée and Henry R. Kravis Research Building. The university says it “will provide 135,600 square feet of interior space on two floors, enough to accommodate over 600 scientific personnel, depending on the researcher’s preferred layout.” The Marie-Josée and Henry R. Kravis Foundation pledged $100 million in May 2015 to support the creation of the research building. The expansion will also include “dining commons, an academic center, a conference center, and associated gardens.”