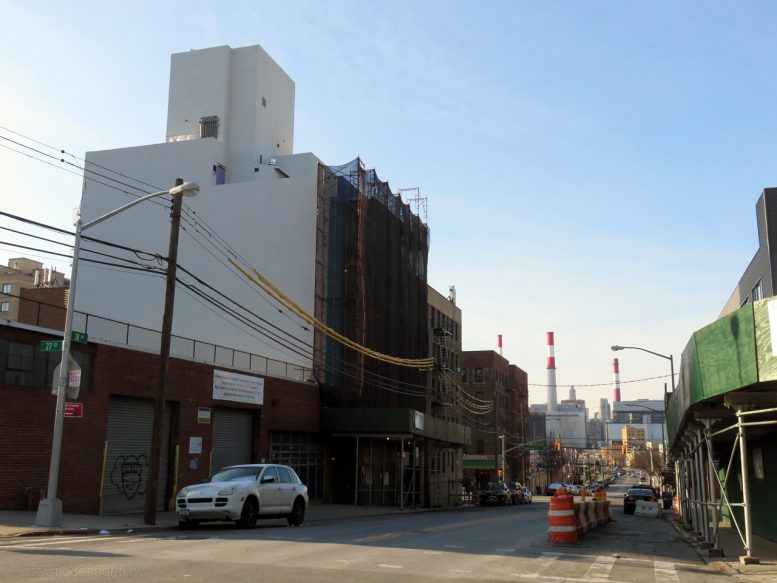 The seven-story, mixed-use building at 25-10 38th Avenue in northern Long Island City appears close to completion. Although the project is currently on hold, only minor exterior work remains.

The demolition permit for the project was filed in March 2013, and the site was cleared by the start of 2014. Foundations and the basement retaining wall were poured by the end of 2014. The above-ground structure was erected over the course of 2015, and much of the façade was painted by early 2016. Since that time, construction progress has virtually ground to a halt, with practically no changes observed over the rest of the year. According to the Department of Buildings, a partial stop work order has been issued for the site, though new building permits have been issued as recently as September.

The 21,571-square-foot structure contains 11,830 square feet for 19 residences, averaging 1,135 square feet apiece. The ground floor contains a residential lobby, a 2,799-square-foot retail space and access to a 10-space parking garage. The project is designed by Astoria-based NDKazalas Architecture PC. Kevin Hernandez of GIL Homes is listed as the owner. MRMD NY Corp. is the general contractor. The 41-foot-wide, mid-block lot sits on the south side of the avenue. Like many other developments in the residential/manufacturing M1-2/R6A district, the new building replaces a single-story, brick-faced warehouse.

The original proposal, submitted in 2012 and illustrated on the architect’s website, reveals a 10,000-square-foot structure rising five stories. Two of the twelve residences would have been duplexes with private roof gardens. The design channeled a distinctly modernist aesthetic through interlocking, rectilinear forms, staggered vertical panels, and windows of varying sizes. The website described the project as “an arrangement of pure geometric forms easily discernible and without unnecessary ostentatious ornamentation.”

It appears this description was only conceptual, as the first permits, filed in April 2013, indicate a seven-story building with almost twice as much floor area. The building rises 70 feet to the main roof, and its prominent, white-washed bulkhead adds about 20 more feet. This massing makes for an effective transition between the taller buildings on the blocks to the south, the mid-rises next door, and the lower buildings to the northwest. The building maintains the basic design premise of the original concept. A square, paneled frame wraps around the central portion of the façade. Brick cladding fills the space between the staggered, floor-to-ceiling windows and balconies. The top-level setback faces north, towards nearby Astoria, with the Manhattan skyline visible to the west. About one-third of the 3,944-square-foot lot is dedicated to a rear yard. The Remedial Action Work Plan, filed by Long Island Analytical Laboratories Inc. in December 2013, lists amenities including a gym, recreation space, bicycle storage and laundry.

25-10 38th Avenue is situated at the junction of three neighborhoods, at the northwest edge of Dutch Kills, a rapidly developing neighborhood characterized by a mix of residential, manufacturing, and hotels. Low-slung, industrial-residential Ravenswood stretches across the blocks to the west, dominated by the towering chimneys of the Ravenswood Generating Plant. Astoria begins a couple of blocks north, though the de facto border definition is fluid enough that the Remedial Action Work Plan places the building within Astoria despite its Long Island City address.

The once-peripheral area is seeing swift change, reflecting the dramatic wave of construction sweeping across Long Island City. A six-story mixed-use residential and manufacturing building is under construction across the street at 25-11 38th Avenue. A six-story, 55-unit residential building is in progress half a block north at 37-10 Crescent Street, next to a commercial project at 37-02 Crescent Street. In addition to these projects, several other nearby sites have already been cleared for construction and await future development.