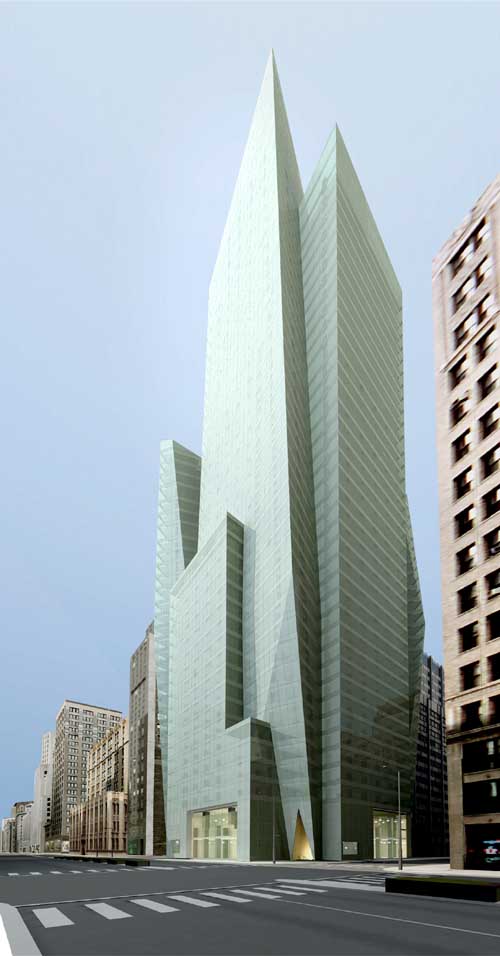 While much activity is occurring in Midtown, the area surrounding Madison Park has been relatively quiet. This is about to change, as the city’s Department of Buildings indicates that plans for 400 Park Avenue South have finally been approved, meaning that Christian de Portzamparc’s skyscraper can finally begin to rise.

The building is going to be quite the change for the area, rising in the form of several interconnected shards–a stark deviation from the straightforward architecture of the MetLife Tower and One Madison Park (One Madison in particular is an exercise in simplicity).

Site diagrams filed with New York’s Department of Buildings give a better look into the dynamics behind the structure, with detailed drawings of each ‘shard’ within the building. The many components come together as an extremely graceful (and tasteful) whole, which will eventually contain over 400 residential units, in addition to ground-level retail space.

While Park Avenue South isn’t particularly fancy by New York standards, Portzamparc’s creation is certain to add an air sophistication to the immediate neighborhood. No future retail tenants have been announced, but something luxurious would seem to be in the cards–after all, nearby buildings do play host to some of New York’s finest establishments (Eleven Madison Park, one of New York’s best restaurants is in its eponymous building on Madison Square Park). Luxury tenants would definitely be sensible and suitable for this particular building.

Besides the retail and residential, the plans for 400 PAS also include a subway entrance, which will be a welcome amenity for the public. The building should start construction this year, and while no completion date has been given, the end of 2013 or early 2014 would seem likely.