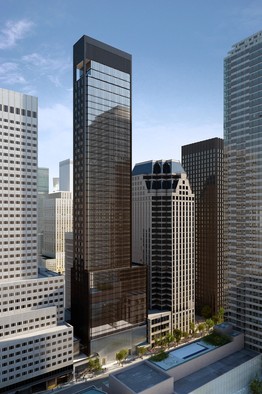 While NIMBYs characterization of the Rockefeller Center neighborhood as ‘mid-rise’ eventually got the top 200 feet of the Torre Verre lobbed off, the neighborhood is anything but. 20 West 53rd, the soon to be Baccarat Hotel, is proof, given it will be barely visible from the 5th or 6th Avenue, even though it will be over 600 feet tall.

The building’s profile is extremely slender, with the height likely intended to maximize views (which it won’t). The top floors may have decent vistas of the Manhattan canyons, but overall exposure will be limited due to the neighborhood’s density. Fortunately, it seems the upper component of the building will not have blank walls on its side, a pleasant change from other new buildings in the neighborhood (most notably Extell’s new Hyatt at 135 West 45th Street).

The design of the building is simple, which works well with the dark facade. Although the building’s slight withdrawal from the street-wall is troublesome, the overall darkness does have similar echoes in nearby buildings, most notably 1300 6th Avenue (visible in the render two buildings to the right).

One major problem with the design is how the tower and podium interact with one another. The tower–the residential component of the building–rests awkwardly on the podium, decidedly off-center. The transition isn’t awful and thankfully the podium lacks bulk, but it definitely interrupts the flow of the building. The notch at the top isn’t a great addition either, especially as the building seems to be going for sleekness, but it will definitely boost the value of the top penthouse (likely as a private terrace).

The project will include 115 rooms as well as 64 apartments or condominiums. Excavation work is currently underway on site, and completion is scheduled for 2014. Here’s the original Department of Buildings application, as well as a story by the Wall Street Journal, for more information.