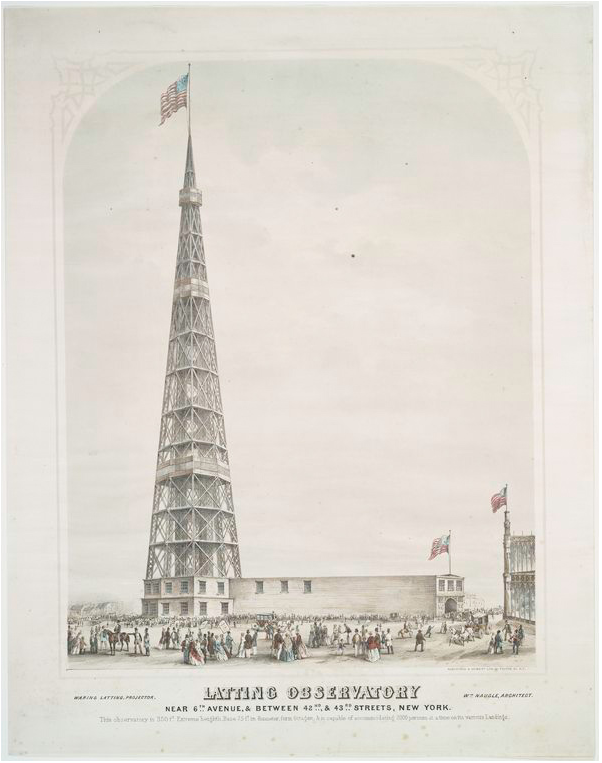 As the home of the skyscraper, New York’s past with tall buildings is long and storied. One that is often forgotten is that of the Latting Observatory Tower, which reigned as New York’s tallest from 1853-1856.

The tower, primarily made of wood and braced by iron, rose to 315 feet. The Latting Observatory was built as part of the 1853 Exhibition of Industry of All Nations, and was adjacent to the also-destroyed Crystal Palace. Located across the street from Bryant Park, the observatory provided New Yorkers with the city’s first legitimate observation platforms.
Unfortunately for New Yorkers, the tower burned down in 1856 as a fire from a nearby shop spread through the neighborhood. The tower’s short-lived position as the tallest in the city was unrivaled for many decades, only topped in 1890 by the construction of the twenty-story New York World Building. Sadly, the World Building was also destroyed, although it was by demolition rather than fire.
While it’s unfortunate that such a significant part of New York’s vertical history has been lost, it’s even more disappointing to see the Latting Observatory all but forgotten in the city’s history books. Although its time at the top was brief, the structure was definitely innovative, and even bears a slight resemblance to the Eiffel Tower, built fifty years later.