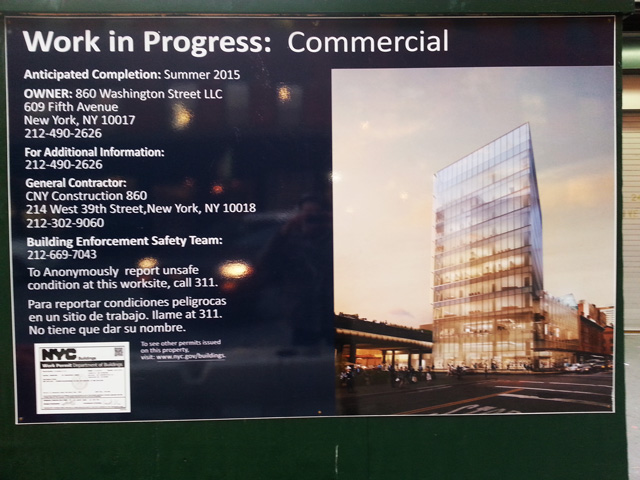 Machinery is on-site and digging has begun at 860 Washington Street, which is the latest project to begin construction adjacent to The High Line. The 10-story and 175 foot tall building is being developed by Romanoff Equities, and the architect is James Carpenter.

860 Washington Street will be primarily office, with retail occupying the first two floors, keeping in character with its pedestrian-oriented surroundings. The project’s approval process took several years; ultimately, the height was shortened to the current version, which will contain 116,000 square feet of space. Comparing 860 Washington to its surroundings – which include several new buildings – offers an interesting take on city zoning and historical districts. The Morris Adjmi-designed 833 Washington was also height-chopped, though the initial version of that structure was actually shorter than the final design of 860 Washington; the reasoning behind arbitrary planning decisions seems unsound when it cannot be applied consistently.

Though Romanoff used The High Line as an excuse for 860 Washington’s height, as it bisects the lot, the developer should have been allowed to build the initial, 215-foot version. Indeed, the Standard Hotel is across the street, and it stands 261 feet tall; the ‘preservation’ of the ‘historic’ Meatpacking District is, at best, a hodge-podge of non-commitment. Indeed, the buildings that are supposedly ‘historic’ are anything but; they were literally warehouses used for slaughter and the sale of live produce. Low-slung structures of significance are certainly worthy of preservation, but that is not the case for most of the Meatpacking District, which is under-utilized despite excellent transit accessibility.

Buildings like 860 and 833 Washington represent a natural transition for the neighborhood, but they should be built to sizes that can actually satiate demand. Instead of preserving aesthetically unfortunate warehouses that were never meant for enjoyable human occupation, the neighborhood should become a vibrant and dense node of modern, forward-thinking architecture that enhances the city, and contributes to its growth.

860 Washington is certainly a step in this direction, though it is a shame that the site is not being built to its full potential. Completion is expected in the summer of 2015.