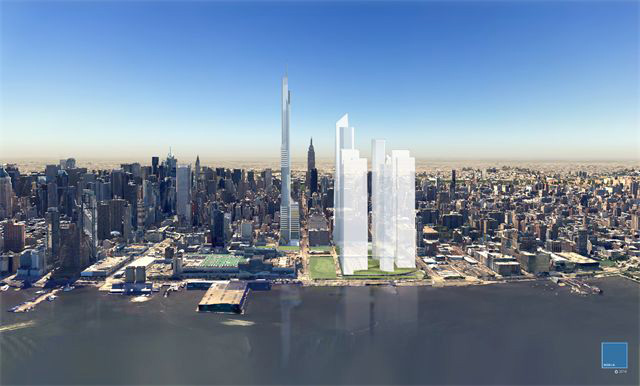 The conceptual ‘Hudson Spire’ has a new set of renderings, revealed via Massey Knakal‘s brochure on the site. The brokerage commissioned MJM + A Architects for the schematics, which illustrate the lot’s vertical potential.

With 1.22 million square feet, the mixed-use building would rise 108 floors and over 1,800 feet, making it the tallest tower in North America. The site’s address is 435-447 Tenth Avenue, and it sits adjacent to another parcel that Sherwood will eventually develop. Construction activity is beginning to boom in the vicinity, as the 7-line’s 34th Street extension is set to open this year. The station will anchor a new business district, and the corresponding skyline will become the neighborhood’s defining feature, as it will likely host the tallest buildings in New York City.

The Hudson Spire would certainly represent an upwards leap. The height reduction of Related’s tallest tower — at 30 Hudson Yards — will also allow any tower to enjoy completely unobstructed views from a relatively low 1,227 feet. Massey Knakal’s concept highlights luxury residences from the skyscraper’s 80th to 108th floors, and views would definitely be the driving motive behind extreme verticality.

Whether the first residential towers of the Hudson Yards can justify astronomical pricing remains to be seen, but the effort to transform the neighborhood is already beginning, and several new projects are about to sprout. Indeed, Diller Scofidio + Renfro and Adrian Smith are designing residential towers for Related; given the scope of those buildings, there is ample evidence something similarly stunning could rise on the Hudson Spire site. The Spire’s imminent potential also harkens to the dramatic quality gap emerging between the Far West Side and Midtown East, and as New York’s flagship companies begin migrating to the glimmering buildings of the Hudson Yards, the area surrounding Grand Central will appear increasingly antiquated — though if the re-zoning does pass under DeBlasio, Park Avenue’s prospects will become much brighter.