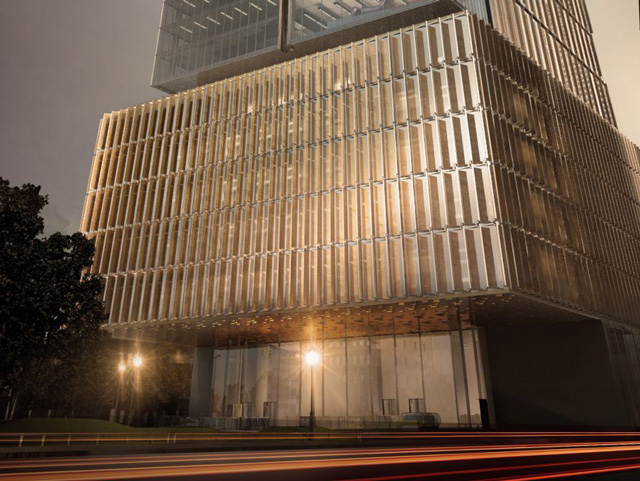 While the primary coverage of Related’s Hudson Yards development has focused on the eastern portion of the railyards, the company’s acquisition of adjacent parcels — covered by YIMBY last year — promises additional benefits to the neighborhood, as a master plan well beyond the initial scope is beginning to take shape. Now, the first real renderings for 50 Hudson Yards have been posted to Piranha NYC’s website, indicating that the tower’s construction is on the near-horizon. The first glimpse of 50 Hudson Yards featured the skyscraper as relative background noise, framing the larger supertall at 30 Hudson Yards; the latest reveal comes with some notable shifts in the projected massing, opening the possibility for comprehensive trading levels. Indeed, it appears as though the tower’s intended target would be large financial firms, as the building features massive floor-plates, similar to the podiums of 175 and 200 Greenwich Street.

As depicted in Piranha’s renderings, 50 Hudson Yards will stand approximately 62 stories to its pinnacle, with extremely generous ceiling heights pushing the tower’s roof to approximately 1,068 feet above street level, per recent Related graphics posted on Curbed. The tower will measure 2.3 million square feet.

50 Hudson Yards’ overall appearance is defined by blocky massing, with the tower divided between three sections. One of the building’s most notable features are double-height floors interspersed amongst the mid-levels, underlining both the flexibility of floor-plates, and the enormity of ceilings that would stretch above and beyond comparable new developments in Manhattan.

Flexibility is crucial given the shifting needs of financial companies, and by underscoring the potential for double-height floors — and column-free trading levels — Related is clearly making a play for a particular segment of the market. Whether the build-out of The Hudson Yards impacts the viability of The World Trade Center remains to be seen, but if Related can offer space that is superior to the World Trade Center at a lower price, the ongoing insanity at The Port Authority could ultimately delay construction of 175 and 200 Greenwich Street until the 2020s. Given 50 Hudson Yards’ relatively ‘boxy’ appearance, some may not appreciate the design — but in the context of the larger development, the scheme represents a crucial link in the realization of Midtown West’s future. With so many supertalls rising in such a small area, there are bound to be buildings that some perceive to be dull; given the need to catalyze the neighborhood, what’s most important is appealing to anchor tenants that can further establish the Far West Side as a viable CBD. And in this regard, the plan for 50 Hudson Yards makes perfect sense. Per the official website, 50 Hudson Yards’ western counterpart — 55 Hudson Yards — has a tentative completion date of 2018, which signals a bright outlook for its larger neighbor; given apparent progress in the tower’s conceptualization, 50 Hudson Yards’ may rise in the near-future, possibly by 2020. While the architect of the new tower has not been publicly revealed, KPF designed Related’s other major office towers in the neighborhood, and the firm may be involved in the latest plans, as well.