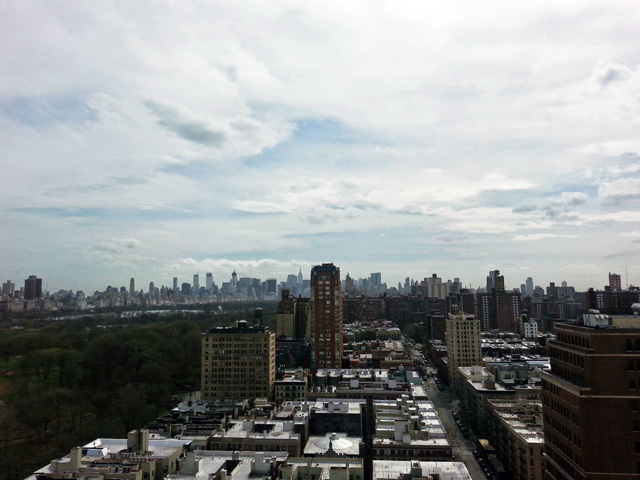 Midtown View from One Morningside

Construction is wrapping up on One Morningside Park, located on the corner of Manhattan Avenue and 110th Street, and YIMBY recently ventured up to the top of the building for some photos of the views. GF55 Partners designed the project, and 110 Manhattan Equities LLC is the developer. Central Park view from One Morningside

Most of One Morningside’s exterior is now complete, and the project has 54 units in total. While the penthouse has not yet hit the market, sales have been swift, and the building is close to sold-out; as of January, only 30% of units remained available.

Midtown panorama from One Morningside

As the photos show, the building is located in a neighborhood dominated by mid and low-rise structures, and its relative isolation allows for sweeping views over Harlem and The Upper West Side. The upper reaches of Central Park are prominent, as is the Midtown skyline; looking closely, 432 Park Avenue is beginning to edge into the distant horizon, which it will soon dominate.

Harlem view from One Morningside

While the Midtown skyline is relatively far away, One Morningside’s vantage point over Harlem is especially impressive, as the view offers a true sense of the neighborhood’s built form. Though the landmarked areas of Lower Manhattan are most frequently compared to European cities, South Harlem’s density is overwhelming and almost Parisian-like, given the overwhelming number of pre-war structures and lack of high-rises. One Morningside, photo from this past January

Completion of One Morningside Park is expected later this year.