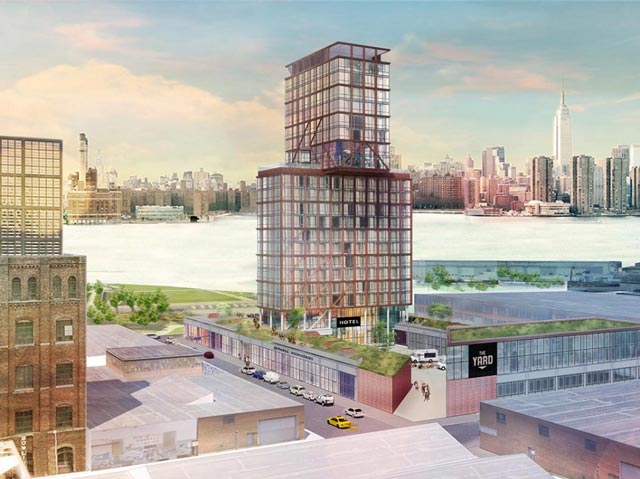 19 Kent Avenue will become one of the largest office buildings in Williamsburg, but before the project’s current configuration, it was conceived as a potential mix of hotel and retail space. Workshop DA has renderings of the futuristic design, and given the size of the assemblage — which spans the entire block — the site leaves ample room for creativity.

The rendered version would have totaled 160,000 square feet, with new retail lining the entirety of the block. A courtyard would occupy the site’s center, with adjoining pedestrian arteries bisecting the shops, creating a lively public space along the ground level. 19 Kent Avenue’s 21-story hotel would rotate half-way up, allowing for “rooms with different view exposures.” 19 Kent Street at night inside courtyard, image by Workshop DA

Permits indicate the ultimate version of 19 Kent Avenue will span 384,000 square feet, and the additional density will benefit the neighborhood. While the Wythe Hotel has crowned the area’s renaissance, many vacant and underused lots remain, and escalating prices are pushing a surge in development.

Workshop DA’s vision for 19 Kent Avenue is nonetheless impressive, and its form evokes the creativity of both the Domino redevelopment and another unbuilt project by OMA, originally set for Jersey City. Shape-shifting architecture remains a relative rarity in New York City, but as technology keeps advancing, built envelopes will continue to evolve; Bjarke Ingels’ tetrahedron on 57th Street proves that unconventional massing can have its benefits, including the maximization of accessible outdoor space.

Heritage Equity is the site’s developer, and while Workshop DA’s concept will not be realized, the site’s eventual occupant will likely be large and attractive, given the neighborhood’s increasingly high-end appeal. DOB filings show that the new building will stand nine stories and 134 feet tall — substantially shorter than the renderings above — though evidently 19 Kent Avenue’s bulk will not be slight.

No completion date has been formally announced.