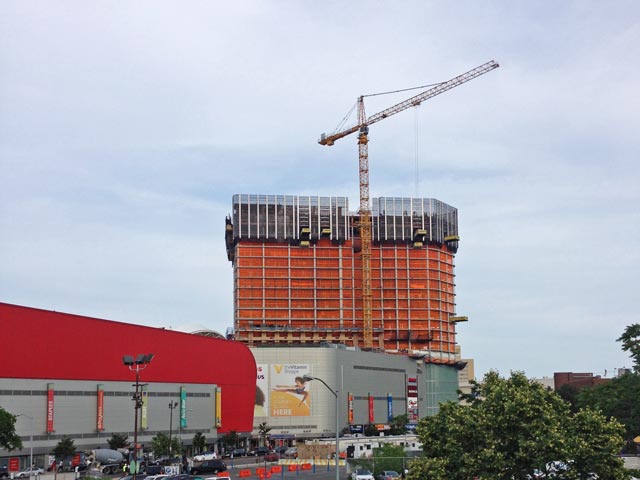 A reader sent in construction photos of 61-01 Junction Boulevard in Rego Park, Queens; the site has seen major progress since YIMBY reported on new building permits last December, and the new 24-story tower is already rising quickly. Vornado is the developer, and SLCE is the architect of record.

Per the DOB, 61-01 Junction Boulevard will measure 290,000 square feet, which will be divided between 314 residences. The residential tower is rising above an old parking garage, directly adjacent to Rego Park Center, and the end-product will rise 288 feet to its pinnacle.

61-01 Junction Boulevard presents an opportunity for relatively pedestrian-friendly densification, despite the surrounding neighborhood’s auto-centric appearance. The project is located near the M and R subway lines, and while much of Rego Park was conceived in the post-war period, the neighborhood’s access to public transit is still comprehensive. Redeveloping with both density and pedestrians in mind would be ideal, and though 61-01 Junction Boulevard will sit atop a garage, it’s a step in the right direction. The design for the new tower will be fairly simple and straightforward, and renderings show that the structure may become one of the tallest buildings in Rego Park.

Given transit access, new development in Rego Park should be built with an eye for transforming the neighborhood, as an abundance of parking lots could eventually yield an area that is both walkable and attractive. Incentivizing good design could create a community that is less auto-centric, and matching growth to transit accessibility would maximize potential.

In the meantime, 61-01 Junction is roughly half-way up, and completion would appear to be likely by 2015.