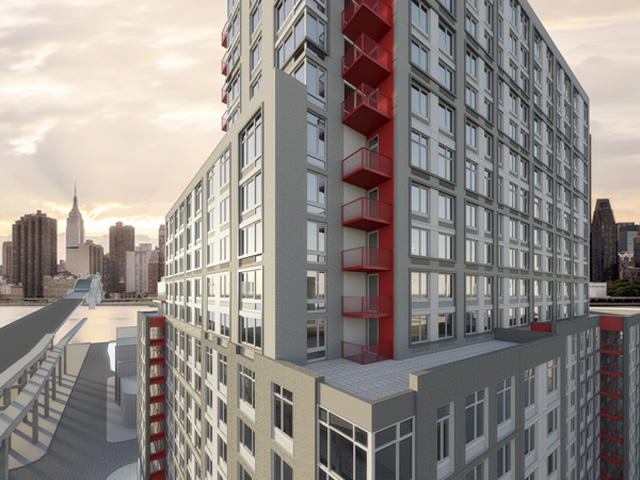 41-42 24th Street [The Court Square Blog]: Concrete is up to the ninth floor at 41-42 24th Street, a 21-story building being developed by the Worldwide Group in Long Island City. Signage lists an anticipated completion of Fall 2015.

1238 Lincoln Place [Brownstoner]: Developer Brookland Capital has filed a building application to construct a four-story, 10-unit low-rise at 1238 Lincoln Place in Crown Heights. The planned 6,801 square-foot structure would replace a neglected two-story walk-up. Demolition permits have not yet been approved.

83 Humboldt Street [The Real Deal]: Developer 83 Humboldt LLC is planning on constructing a five-story and 10-unit residential building at 83 Humboldt Street, in Williamsburg. The 7,586 square foot building will replace a one-story Chinese takeout restaurant, which sold for $12 million last April.

56 Leonard Street [Curbed]: Construction of 56 Leonard “has reached half of its superlative height” of 821 feet, and the first glass panels are being installed at the lower levels. The glass façade is described as “very reflective,” and the tower will quite the spectacle when it opens in 2016.

498 West End Avenue [Curbed]: A 12-story mid-rise built in 1912 — at 498 West End Avenue, between West 83rd and West 84th Street on the Upper West Side — has been approved by the Landmarks Preservation Commission to receive a two story addition, adding 4,000 square feet of new space. The new rooftop will also sport a new cornice.

20 Exchange Place [Commercial Observer]: Natixis Real Estate Capital has “closed a $240 million construction loan” for the residential conversion of 20 Exchange Place in the Financial District. Developer DTH Capital’s goal for the 59-story, 800,000 square-foot project — built in 1931 — “is to reposition and create an identity for the building, because it is the most iconic tower in New York that few people could identify on the skyline.”

1700 Broadway [Brownstoner]: The vacant stretch of Broadway in Ocean Hill — between Decatur Street and Rockaway Avenue, at 1969-1712 Broadway — will soon give rise to a six-story apartment building by the same developers who proposed a six-story project a block to the north. City Council approval has already been granted, and construction is imminent.