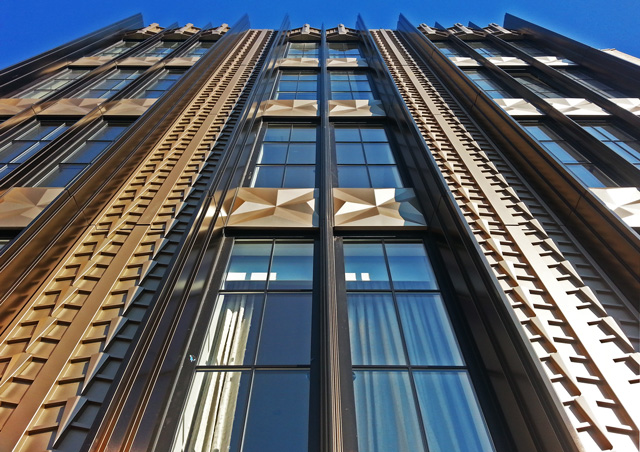 YIMBY sat down with John Cetra — of husband and wife duo CetraRuddy — to discuss the pair’s recent work in New York City, which is verging on prolific. In addition to the record-setting conversion of Walker Tower, the firm’s current projects include Stella, 12 East 13th Street, 135 East 52nd Street, and a ground-up development at Greenpoint’s 77 Commercial Street. Even with their stellar roster, the most iconic may be yet to come, with the Roseland Tower set to transform the Midtown West skyline, and an as-yet-unannounced skyscraper that will become the tallest building on the Upper East Side, breaking the 1,000′ mark.

Between Walker and Stella, which project has been more challenging?

What we’re going to do at Stella — we’re recreating the head-dress, which is what the original stone crown resembled. And that’s really interesting because we’re literally going to replicate what was taken down.

Walker Tower is a little different because there was a lot of re-interpretation, since we actually added to the original structure — it was a bit more of a challenge, and it was also the first of the two we worked on. The original architect planned a very ornate structure. What’s your favorite thing about the interiors at Walker Tower?

I love the layouts. Wherever you are, you’ve got these views: North, South, East, and West. And fireplaces. Michael really wanted fireplaces — real ones. So we got them to work.

It’s also an amazing opportunity for residential conversion because nothing else can go up nearby; it’s zoned R8, but new buildings in the neighborhood have a height limit of 120 feet. The views are forever. Stella is actually somewhat similar in that regard, as the surrounds there are also restricted.

The thing about Walker Tower is that it’s totally different from every other project I’ve seen, with all the love and care that went into it, all the hardware and stone — literally everything. But Michael wanted the best — we did the opposite of value-engineering. He never said “Oh, we can’t afford that,” — instead, it was “What else can we do to this to make this apartment even more amazing?”

And that’s why it’s the most expensive building in Lower Manhattan!

Yes. And that’s why you get the most amazing apartments, too. How about 12 East 13th Street? That’s a little more boutique.

Yes — it’s only eight apartments. All of them — except for one — are either duplexes or triplexes. It used to be a parking garage; we are re-inventing its form, and shifting air rights from the back of the lot to the top of the old garage, which will add four stories. The triplexes have amazing staircases, and the upper units will have fantastic views to the north. The building is 75 feet wide, and when you walk into the space, the living and dining rooms take up the entire width. The smallest apartment is 2,700 square feet.

Any details on your Greenpoint project, at 77 Commercial Street?

Well, we had to go through ULURP. I think we came up with something that really worked well; we had to be very conscious of the development’s relation to the streetscape. It’s a very long building, spanning over 400 feet. The base rises eight stories, and the two towers run 30+ floors above that.

Why not something tall and iconic?

Because of the zoning along the Brooklyn waterfront, which limits the height to around 400 feet. Not that height is necessary for a building to be iconic. Are you allowed to talk about the Roseland Tower?

Do height constraints bother you?

When you talk about things like contextual zoning, I hate the fact that I can only go up to X height, and not even a little bit more; there’s no flexibility. All of these controls and limitations were set before inclusionary zoning existed, so now you can add 20% more floor area to a building, but the allowed envelope is the same. You’re squeezing more square footage into the same volume, which is how you end up with nine foot ceilings.

CetraRuddy has some fantastic projects that are decidedly contemporary, but you also draw from classic and traditional elements, as seen at Walker and Stella. Which direction do you prefer?

I appreciate old and new. What I love about Walker Tower is that we took this building, interpreted it, and came up with something that isn’t Ralph Walker, but is still decidedly Art Deco.

One Madison was going to be this tall skinny building right next to the Met Life tower — but replicating Met Life would have been a missed opportunity. Context is important. When designing residential buildings, you want to avoid monotony, because once you’ve worked out the perfect floor-plan, recycling it 50 times can be tempting — though it results in a building that’s really boring. What we did at One Madison was create blocks of apartment types, one with wrap-around terraces, and that really lent itself to something unique. Your recent slate of work is stellar, and it seems like things are really taking off. Any other major developments we haven’t covered?

We’re working on the former Flatotel at 135 West 52nd Street for Joseph Chetrit, and that building is being totally re-done. And it’s fantastic — that’s the tallest conversion we’ve ever worked on.

The building’s curtain walls never quite – they weren’t doing enough. And also, the exterior has deteriorated so much that it would actually be impossible to keep the tower as-is; the facade was literally falling apart. It’s an interesting issue to address, and by giving the building a new look, we will also improve its energy efficiency.

It’s very interesting taking a building that opened in 1991, and re-doing it; that was a bleak time for architecture. We wanted to do something interesting; it’s a series of boxes stacked one on top of another — sort of like Russian Matryoshka dolls. And so we played off of that and carved into it, adding depth.

Lastly, I hear there may be a supertall you are designing on the Upper East Side?