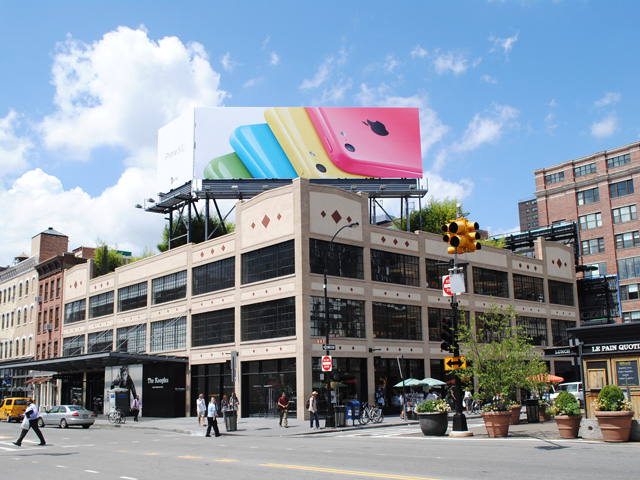 The Apple Store is not a bodega, but is representative of terrible retail planning by New York City

The Commissioners’ Plan of 1811, which laid out Manhattan’s iconic grid that sprawls beyond its chaotic downtown, designated 15 crosstown streets as major 100-foot-wide thoroughfares. The various major crosstown streets got subway stations and those below Central Park have developed distinct identities – home furnishing stores and chic apartments on 23rd, clothes shopping and tourism on 34th, office buildings on 42nd, ultra-luxury condos and world-class shopping on 57th.

By all rights, 14th Street should be just as grand. It sits above the L train, the city’s main vein of gentrification. Its adjacent neighborhoods have exploded in popularity, benefiting mightily from downtown’s ascendence. But the crucial crosstown corridor, and especially its western half, has not fared well. The days of cheap apartments are long gone, but the cheap-looking tenements that once housed them remain, without any real character to speak of. Despite the exploding demand in the last decade or two, there’s been virtually no new construction.

Fourteenth Street had its first moment in the sun around one hundred years ago, as the city’s center was making its way uptown. Elevated trains, subways and a space crunch downtown were pulling Manhattan northwards, and tall commercial buildings popped up on Union Square and 14th Street around the turn of the century. But the center soon rocketed even farther uptown, first to 23rd Street and later up to 42nd and beyond, quickly leaving 14th Street behind.

The next building boom came in the 1950s and ’60s. Greenwich Village became very popular (drawing in, among others, Jane Jacobs) – along with the Upper East Side, one of the last places in Manhattan where new construction was still viable as the city was circling the drain – and builders met the new demand with massive, modernist brick buildings. The Victoria at 7 West 14th Street, by prolific white brick architect Philip Birnbaum, was the largest of these, providing more spartan and affordable accommodations than the grand pre-war apartment houses, but at a density more commonly found on the avenues of the Upper East Side.

It’s hard to say whether this sort of construction would have continued throughout the rest of the ’60s and into the ’70s, as the city’s desirability plummeted. But in any case, the zoning code did not allow it. Builders rushed to file permits before the new 1961 code took effect, after which the dense apartment blocks were no longer allowed.

But by the ’80s, demand for living on 14th Street had certainly reemerged (if it ever left). Development, though, was still not allowed. The Zeckendorf Towers on Union Square East were built in the late ’80s, but only after a politically fraught rezoning that was not to be repeated. Other than that, only one developer managed to assemble enough air rights out of the mid-rise tenements of West 14th Street to build a large scale project – Basile Builders and their Chelsea Verde at 125 West 14th Street, finished in 2001 between Sixth and Seventh Avenues.

Today, demand for new office space in the Meatpacking District is off the charts. The Meatpacking District, once the butt-end of 14th Street, has become a high-rent tech anchor. Google paid $1.9 billion for the old Port Authority building at 111 Eighth Avenue, and new office space in the area rents for well over $100 a square foot – prices more commonly associated with Central Park views uptown. The western end of the street has established itself as one of a select few submarkets in the city where new office construction pencils out without tax breaks. And the L train’s capacity west of Union Square is essentially unlimited, after the hordes from Brooklyn headed to destinations east of Broadway change for the 4/5/6 and N/Q/R.

Residential demand is similarly high. Condos at DDG Partners’s 345 Meatpacking have sold for upwards of $1,500 per square foot, with penthouses surpassing the $3,000/SF mark, and there’s likely much more room for upward growth in rents and condo prices.

To capitalize on this demand, the city should upzone West 14th Street and the broader Meatpacking District. Any rezoning would have to be carefully tailored to local conditions, as the area is ground zero for West Side NIMBYism, but compromises should be possible. Old tenements on the north side of 14th Street

The lowest-hanging fruit is the north side of West 14th Street between Seventh and Eighth Avenues. This strip is a solid block of some of the least attractive pre-war tenements in the city – largely denuded of their cornices and other frills, and nowhere near monumental or charming enough for such a key corridor. The whole block face could be upzoned to the highest densities possible (floor area ratios of up to 12 for apartment buildings, and 15 for offices), after which developers would gradually wait or buy out the tenements’ remaining residents and redevelop them.

What few affordable apartments are left in this part of town wouldn’t last long anyway, as landlords can easily use vacancy decontrol rules to raise rents to market rates after the current tenants leave, so there would be no major loss of affordable housing. With mandatory inclusionary zoning, the number could even increase. Or better yet, the city could have developers pay into a fund that it would use to build an even larger number of below-market units in cheaper neighborhoods uptown and in the outer boroughs. The Meatpacking District would be a bit trickier, since it has more attractive buildings and is a landmark district, but growth is possible there too. The area is ripe for a façadist building boom, whereby developers submit plans to build modern structures within and on top of the old low-slung warehouses. Their horizontality and large footprints, combined with attractive but not historic architecture, make them ideal candidates for redevelopment along the lines of Morris Adjmi’s 837 Washington in the Meatpacking District, or the Hearst Tower on West 57th Street.

But unlike 837 Washington, future façadist towers should be allowed to rise to much higher densities – two or three times the floor area ratio of five of the torqued Washington Street tower. Indeed, there’s plenty of pre-war precedent for these densities in this part of town. The gargantuan Port Authority terminal has an FAR of 13, while the circa-1930 tower on the northeastern corner of 14th Street and Eighth Avenue has an FAR of nearly twenty. If New York City is to rein in its spiraling rents, it cannot limit developers to densities that are a fraction of what was being built nearly a century ago. Tower on the corner of 14th Street and Eighth Avenue

The Landmarks Preservation Commission should also be told to ease up on height-related concerns, to avoid the time- and money-consuming back-and-forth that ensued between the developer and the LPC that resulted in a slightly bulkier building but little else.

The city of Toronto offers a compelling model here. All development is discretionary in Canada’s largest city, and in exchange for the right to build tall towers, the city often asks developers to preserve pre-war structures and integrate them into the bases of new buildings.

The desirability of West 14th Street and the Meatpacking District has soared, and now it’s time for the demand to be matched by new supply. With the area’s high design sensibilities, iconic architecture is virtually guaranteed, so long as the city allows it.

Just as 14th Street bloomed with new office buildings 100 years ago and new apartments 50 years ago, today’s demand should also translate into new construction. This corner of the city has already become popular with tourists during the day and bridge-and-tunnel clubgoers at night, and now it’s time to cater to New Yorkers who both live and work in the neighborhood.