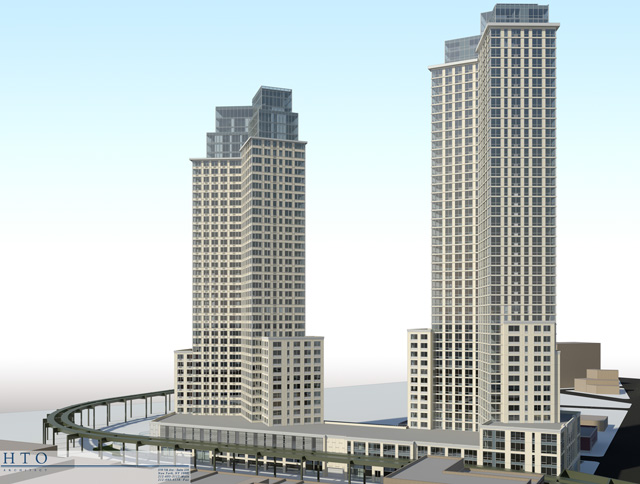 Construction will begin in three to five months on the twin rental towers at 22-44 Jackson Avenue, popularly known as the old 5Pointz site, as YIMBY reported last week.

But before it does, YIMBY got a new set of renderings for the project, which shed significantly more light on the development compared to the lone image that’s been released. Both towers will feature beige stone (a mix of pre-cast and traditional) with glassy corners fronting on Crane Street, a representative from designer HTO Architect told YIMBY. They’ll each be topped by glass crowns containing penthouse apartments and mechanical space.

The two towers will have slightly different identities: the north tower will have taller, loft-style windows, while the south tower’s windows will be smaller and more traditionally framed.

The north tower will also have a glassier base, fronting Crane Street and Jackson Avenue, with retail space within. On the other hand, the podium of the south tower will hold the entire project’s amenity space. Affordable housing units will be spread throughout the two towers, with no separate entrance of the kind that sparked controversy at Extell’s 40 Riverside Boulevard, and a site-plan gives a detailed look into the development’s specifics. Parking, which the developer is required to build in order to get a density bonus, will be tucked away on David Street, and shielded by a number of artists’ studios and displays that the Wolkoffs are providing to make up for the loss of the 5 Pointz gallery. The garage will be all but invisible on the dead-end street, which sits below the elevated railway trestle that carries the 7 train across Sunnyside Yard and on towards Manhattan.

The controversy over the end of 5 Pointz was grossly unfair to the Wolkoffs, who for years let artists use their property at below-market rents. But now that the furor has died down, the focus should be on the buildings that will soon rise. They’ll bring thousands of residents to a transit-rich area that’s been underpopulated for far too long, and – along with the smaller infill buildings sprouting like weeds – will be a huge step towards making Court Square feel like a real neighborhood.