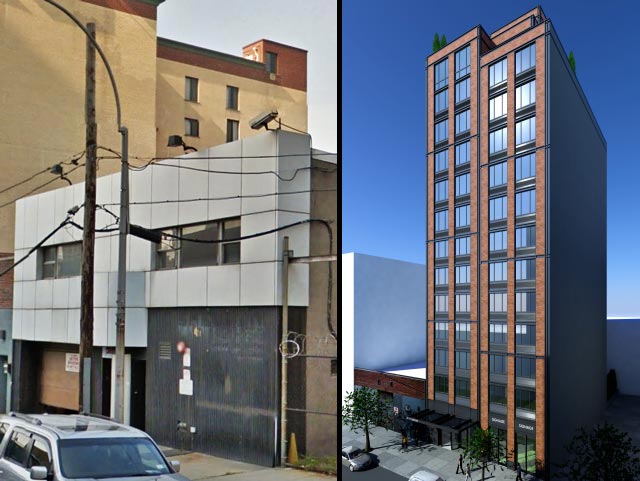 Development in Long Island City’s Court Square area has been somewhat patchy, with dense buildings sprouting on blocks of low-slung warehouses. Crescent Street has been the exception, with the stretch just north of the Queensboro Bridge filling out, and forming the neighborhood’s first new continuous street wall; 42-14 Crescent Street will soon become the neighborhood’s latest addition.

With the part north of the Queensboro nearly built out, Meadow Partners has turned their attention south of the bridge, as we reported on Friday. There, they’ll erect a 48-unit rental building designed by John Fotiadis, for which YIMBY has now obtained a rendering. Long Island City is the only part of the outer boroughs where large residential projects are not required to include parking, and like the other builders on Crescent Street, Meadow Partners will not include a single spot.

The design will be a notch above typical new construction in Manhattan and Queens, and the building will house luxury rentals. A brick facade will be interlaced with metallic accents, and the resulting infill development will contribute positively to Court Square’s urban evolution.

The 13-story building will contain studios, one- and two-bedrooms; construction on 42-14 Crescent Street is expected to start in the fall and wrap up by the end of 2015.