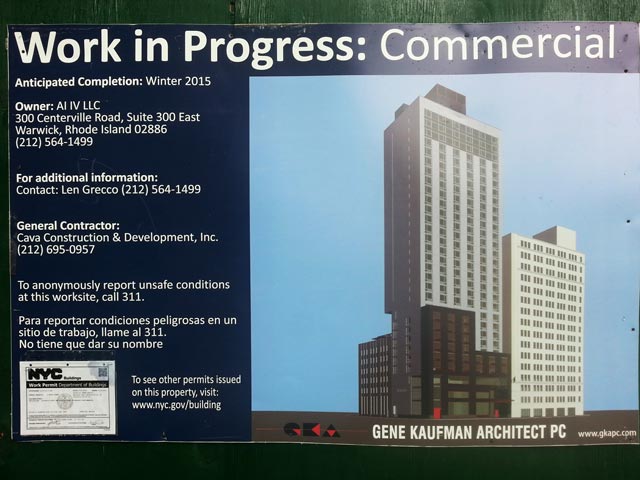 On-site renderings are up for yet another Kaufman-designed hotel, this one coming to 6 Water Street, in the Financial District. Permits, which were issued on July 1st, indicate the developer is Sam Chang.

6 Water Street will stand 29 stories tall, and will have 249 rooms; the scope will total 125,684 square feet, which is about average for new hotel developments in Manhattan. Kaufman’s latest creation replaces pre-war architecture that was undersized but attractive, and the site’s new occupant presents a marked downgrade for a block that enjoys excellent transit access; 6 Water Street is just a short jaunt from several express trains as well as the Staten Island Ferry, and would make an excellent location for either residential or office development. Unfortunately, New York State imposes a floor-area ratio limit of 10 on residential developments, rising to 12 with an affordable housing bonus. As a result, the developer went for the 50 percent higher FAR allowed for commercial property, likely because the less desirable eastern half of the Financial District couldn’t generate the rents or condo prices to make less dense housing worthwhile.

This disparity between residential and commercial zoning is nonsensical, where FARs of up to 33 are allowed for office plots at Hudson Yards. Neighborhoods in Manhattan with excellent transit should be very dense regardless of use. With a state zoning tweak and a city one to take advantage of it, a more attractive and in demand – not to mention, profitable – residential project would likely have been built on the site.

The density cap is especially absurd given that the Financial District is the one part of the city where residential buildings already exceed the modern density limits, due to office-to-residential conversions. Exceptions to state law were made for this type of redevelopment – nearby 67 Wall Street, for example, is about twice as dense as state law would allow for new apartment buildings – to no ill effect.

Correcting the problem would be a major step forward in solving New York’s housing crisis. And while the de Blasio administration likely doesn’t care about FAR limits for market-rate development, it’s hard to see the state opposing anything the city asks for with regards to density, given the lack of opposing interests upstate.

Per on-site signage, completion of 6 Water Street is expected in the winter of 2015.