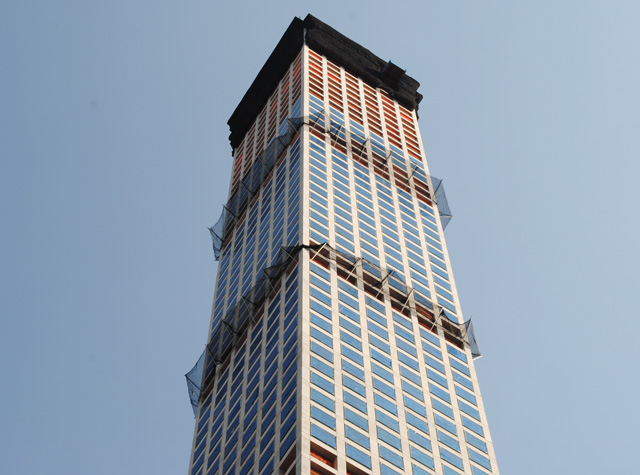 The latest photos of progress at 432 Park Avenue come with a diagram and insight courtesy of reader Marcatio Torres, who has been in touch with workers on-site; as most have noticed and as the illustration makes clear, the tower’s height is now significant, having nearly reached its 1,397-foot pinnacle. Besides continued vertical progress, the building has also surpassed the official roof heights of all other Midtown skyscrapers, and is now the tallest building north of One World Trade Center. Per Torres, “the tower is at its 76th floor (apparent floor 81). Friday had one-half of the floor-slab poured, with the remaining half poured Saturday. These upper floor slabs are poured to a depth of 18 inches, to increase their mass, as part of the building’s stiffness against wind loads.” With its core standing approximately 1,280′ above the street, the building is visible throughout the metropolitan region, and even with 120 feet remaining, 432 Park Avenue already seems to dwarf One57, which — for a brief moment, ending this spring — was New York City’s tallest residential tower. In terms of progress, “the months of April, May, and June saw six floor slabs cast, with the best month being July, which had seven floor slabs cast, a result of the refinement of the processes, the learning curve, and let’s not forget good weather with minimal delays. The open floors (drum floors) took a little more time, but the typical floors proceeded at an average 4 day cycle. This is not bad, considering that two types of concrete are used; the white architectural concrete for columns and spandrel beams, and the grey structural concrete for the core walls and floor slabs. Most flat slab construction in NYC is normally done on a two-day cycle, using just grey structural concrete.” While only ten floors are left before topping-out, the work up top remains substantial, and “the dynamic damper to control sway still needs to rise, and there is to be a major pour of concrete to be made near the top of the building.”

The appearance of architect Rafael Vinoly’s creation has improved significantly with scale, and the choice of white concrete for the facade shows just how attractive and versatile the material really is — as well as incredibly strong, given the forces and dynamics at play in a tower so thin and so tall. Such storied heights will be increasingly common in the near-future, and excavation is nearly complete at 217 West 57th Street, which will have a taller roof than 432 Park, in addition to an approximately 300-foot spire. One block east, 111 West 57th Street will be of a size closer to 432, also standing roughly 1,400 feet tall.

CIM and Macklowe are the developers, and completion is expected next year, when — likely only for a brief moment — 432 Park will actually have the highest roof in New York City, passing One World Trade Center’s by thirty feet.

Talk about 432 Park Avenue on the YIMBY Forums