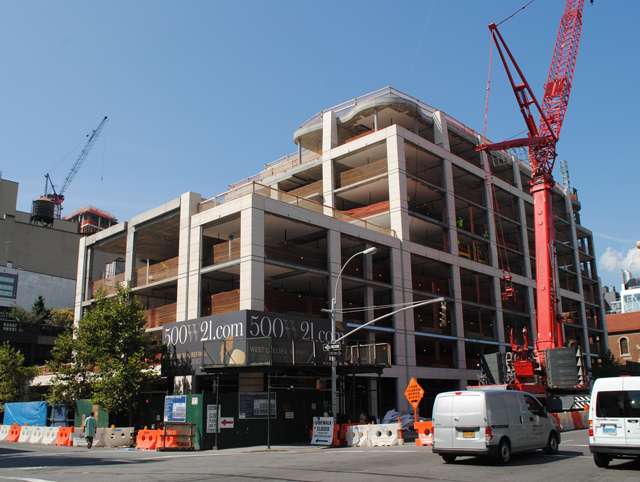 The High Line is in bloom. The cranes have sprouted, and a number of structures along the length of the promenade are rising, among them 500 West 21st Street.

New buildings on the High Line are a mix of starchitecture and less pedigreed buildings, but 500 West 21st Street, developed by Sherwood Equities, is a sign that even the simpler structures have upped their game. Gone are the PTAC-pocked rentals of the last boom, replaced by sleeker condos by national design firms, with prices aimed at a much wealthier set.

The KPF-designed building at 500 West 21st Street typifies the latter model, with light stone (which has already been mostly applied), dark steel, and its massive casement windows; prices start in the $2,000s a foot. While it might not be as memorable as something designed by Jean Nouvel or Zaha Hadid, it’s immeasurably superior to the mediocre 10th Avenue rentals of the early- to mid-2000s. The eight-story building has gone from ground level to topped out since we looked at it in April (Curbed says topping-out happened in June), and construction looks like it might finish on time, by the end of the year. In addition to the stone that will frame the building, the form of the slightly curvy penthouse has also begun to take shape.

The rapid progress is, unfortunately, due to the structure’s short stature, measuring just 80 feet tall. The High Line’s height limits and relatively low density may have made sense back when the buildings were unremarkable rentals. But now that the area has established itself as a magnet for high design and demand, the restrictions rob the skyline of what it deserves.

But if you’re in the for a nearly 4,000-square-foot eighth-floor penthouse, 500 West 21st has one for you for a mere $16 million. You can check out the finishes at Sherwood’s unusually elaborate model unit, housed in a purpose-built glassy structure on the other side of the High Line.