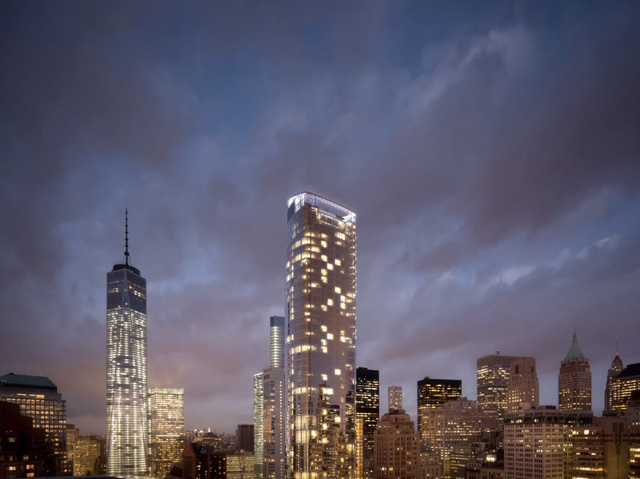 A new video by DBOX depicts the evolution of 50 West Street, from construction to completion; the short clip comes just a few months after YIMBY’s reveal of the project, which featured a slew of fresh renderings. Helmut Jahn is the architect, Thomas Juul Hansen is designing interiors, and Time Equities is developing. Whether construction proceeds as smoothly as the video indicates is up in the air, and excavation is still ongoing, but if the imagery is accurate, the concrete superstructure’s rise will quickly be followed by cladding, and the glassy building should take approximately two years to reach completion. The skyscraper will stand 783 feet tall, towering over nearby structures, and becoming one of the tallest residential buildings in Lower Manhattan. Helmut Jahn’s design is smooth and sleek, and 50 West Street’s context within a predominantly pre-war neighborhood enhances the tower’s appearance, and the contrast humanizes the structure, softening the lower levels. Above, the building is cast against One and Four World Trade Center, and its contemporary neighbors are similar in appearance, each derived from glass and steel. Combined, the reflections off the World Trade Center and 50 West Street will be stunning; both sunrise and sunset will be showcased on the actual cityscape, and if Lower Manhattan’s glassy towers are good for one thing, it’s integrating sky and skyline.