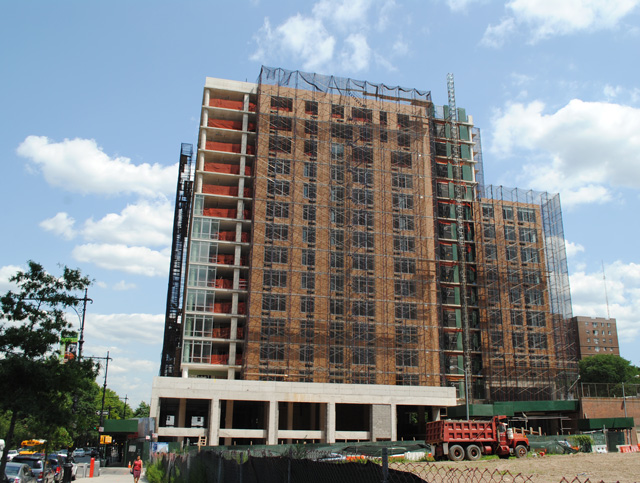 While Flatbush Avenue and its extension have become a showcase for striking tall towers — from Toren off the the Brooklyn Bridge, to Atlantic Yards and BAM South, on the other end of downtown Brooklyn — the streets around it are being filled in with less showy, but equally necessary rental blocks.

One of those infill buildings is 81 Fleet Place, which has topped out, and where façade installation is underway. This area just west of Flatbush is in particular need of density and some semblance of urbanity, so the project and those like it are very welcome.

From the Brooklyn-Queens Expressway and the public housing towers to the north of the site, to the vast institutional and housing urban renewal scheme to the south, Robert Moses completely eviscerated the urban fabric in this part of Fort Greene. And now, John Catsimatidis is rebuilding a small part of it. The former Republican mayoral candidate’s Red Apple Group is responsible for developing the 13-story rental building, which will contain nearly 200 apartments (of which 20 percent will be let at below-market rates).

The Dattner-designed building will be L-shaped and front on Myrtle Avenue and a newly-created Hudson Way thoroughfare, enlivening the area with a solid street wall, more pedestrian connectivity, and 10,000 square feet of retail space. The building is a mix of brown brick on the sides with a glassy accent on the corner, sitting atop a slightly protruding retail bay.

The project will be the third in Red Apple’s four-building redevelopment of the south side of Myrtle Avenue, from Prince Street to Ashland Place, with 81 Fleet Place sitting between 160 (also under construction) and 218 (already completed). Red Apple also controls the much more generously zoned development site at Prince and Myrtle, which can handle a skyscraper of approximately 330,000 square feet.

Talk about 180 Myrtle Avenue on the YIMBY Forums