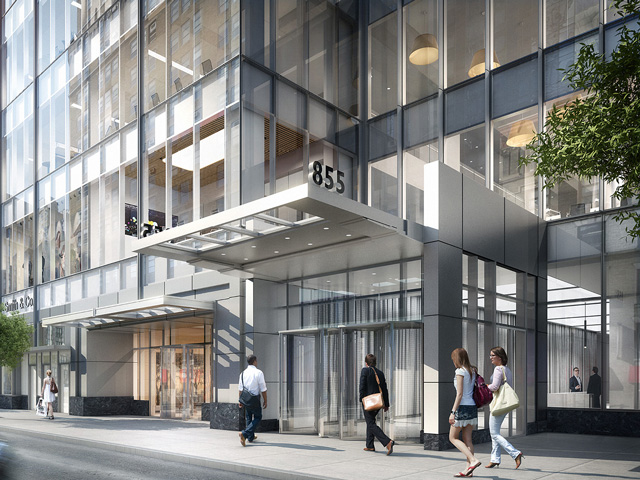 YIMBY has the first full reveal for Durst’s 855 Sixth Avenue, where Cook + Fox is the design architect; on-site renderings have been up for quite some time, but until now, the actual tower’s appearance was hidden. A Durst company brochure has additional information, and all the specifics.

Construction is already making quick headway, and the first few floors of the tower are now up; the project had been on-hold for several years, and sat through the recession as an empty pit before rising above ground this July. 855 Avenue of the Americas will eventually stand 41 stories and 479 feet tall. Office will take up floors two through six, totaling 171,000 square feet, with a stated capacity of 990 individuals. A 20,000 square-foot terrace will rest above the fifth level, and besides outdoor space, the fourth floor will feature a partial double-height ceiling, and a “town hall” area. Two floors of retail will wrap along Sixth Avenue, and given the building’s location — in terms of pedestrian traffic, one of the most visible in the city — tenant(s) should not be hard to find. Cook + Fox’s design for the tower is unsurprising given the previous glimpse, and the building will be an exercise in glassy simplicity. The site exemplifies the kind of development deserving of more air rights: while projects next to the 7-line extension have allowed FARs of up to 30, permits indicate a total FAR of just below 15 for 855 Sixth Avenue, despite access to nearly every subway line.

If De Blasio wants to encourage more affordable housing — and if the housing crisis in general is to be mitigated — removing the state cap on residential development is essential. Enabling Midtown’s transition into a place where people can both live and work would take advantage of existing capacity while also alleviating the shortage, and more air rights could afford greater architectural creativity, especially if extra FAR is subject to conditional design review.

The entirety of 855 Sixth Avenue will span 570,000 square feet, with the remaining space to be divided amongst 375 rental apartments, which will have an entrance separate from the office and retail components. Completion is expected in April of 2016, though the office portion is set to open at the end of 2015.

Talk about 855 Sixth Avenue on the YIMBY Forums