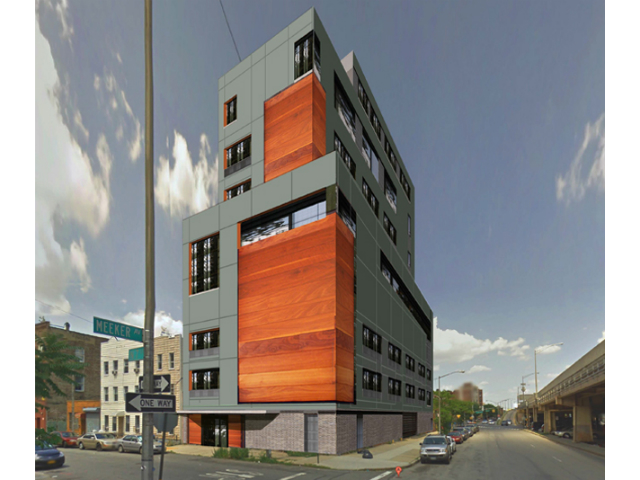 Normally in an R6 zone — like the one around the Brooklyn-Queens Expressway, in Northside Williamsburg — you’re only allowed to build to a floor-area ratio of a bit more than two. But if you build something of community use – like, say, a school – you can go much higher.

And that’s exactly what Williamsburg-based Harry Einhorn did with 301 North 7th Street, a school nearing completion overlooking the BQE. At nine stories, 118 feet and nearly twice the density normally allowed, it will tower over its surroundings (not that the scale of the BQE borderlines are worth preserving), and with a distinctive design depicted in a rendering obtained by YIMBY.

SoHo-based Kutnicki Bernstein Architects created a building with a gray surface and irregularly-placed windows, with bright accents on the North 7th Street side (the developer told YIMBY that they will turn out more brown than the orange as rendered).

The occupant, according to The Real Deal, will be private educational company MetSchools, who’s paying $1 million a year to start, rising to $1.4 million in the second and nearly $3.9 million in the twentieth:

MetSchools, led by CEO Kevin McCarthy, currently runs infant-and-toddler, preschool and elementary school programs through its Williamsburg Northside arm. It also operates schools in Manhattan, such as the Montclare Children’s School on the Upper West Side at 747 Amsterdam Avenue.

Construction has already made major headway, and 301 North 7th Street topped out this past spring.

Talk about 301 North 7th Street on the YIMBY Forums

Developers Close on $385M in Financing for 470-490 Kent Avenue in Williamsburg, Brooklyn