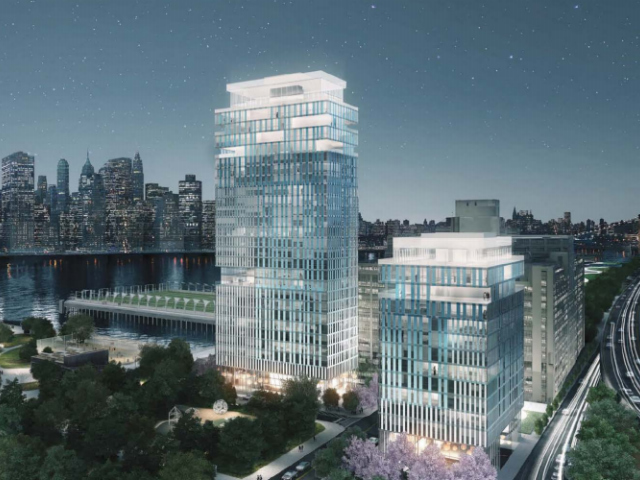 5 Atlantic Avenue [DNAinfo New York]: Developer Brooklyn Bridge Park has received 14 unique proposals for their planned towers —  roughly 31 and 15 stories — located at 5 Atlantic Avenue on Pier 6, in Brooklyn Heights. The towers could potentially hold up to 290 and 140 units respectfully; the developer “will seek the recommendation of a design subcommittee.”

480 Main Street [Roosevelt Islander]: Hudson Related has topped-out on their 22-story and 266-unit residential building at 480 Main Street, on Roosevelt Island. The façade has yet to be installed, but renderings reveal a very contemporary, glassy design; completion is expected “near the end of 2015.”

44-30 Purves Street [The Court Square Blog]: Environmental surveying is underway at the development site at 44-30 Purves Street — in Queens Plaza, of Long Island City — where Brause Realty has plans for a residential building of “around 250 rental units.” Construction fencing has gone up around the perimeter, but building applications have yet to be filed.

Domino Sugar Redevelopment [NY Daily News]: Two Trees is set to continue the partial demolition of the Domino Sugar Factory — in Williamsburg — to make way for their five-tower and $1.5 billion redevelopment project; scaffolding could be erected to dismantle the “Domino Sugar” sign — which is to be restored — in the next few days.

Western Queens Rezoning [NY Daily News]: Community leaders in western neighborhoods of Queens are vocalizing to rezone specific areas to “allow for taller buildings and potentially denser development” in an effort to produce enough stock for the housing demand. Areas highlighted are parts inner Long Island City, Northern Boulevard near 45th Street, and the blocks along Broadway and Northern Boulevard in Woodside.

5 West 125th Street [New York Post]: Large commercial tenants have signed on to lease space at a seven-story and 30-unit mixed-use building currently under construction at the through-block site of 5 West 125th Street, in Harlem. The 130,000 square-foot building will contain three, 30,000 square-foot commercial floors; Bed Bath & Beyond and WeWork have already leased a floor each.

87 Newkirk Street [The Jersey Journal]: Knight & Swan LLC is demolishing an abandoned three-story structure — located at 87 Newkirk Street, in Journal Square — “to make way for ‘a multi-story residential building’ with market-rate rentals.” The developer has not yet revealed the scope of the project, but construction is set to begin “in the first half of 2015.”

954 Bergen Street [Brownstoner]: Being developed by Brookland Capital, façade installation has made headway at the six-story and 36-unit residential building at 954 Bergen Street, in Crown Heights. Designed by Issac & Stern, the building appears almost completed; opening is scheduled for September.