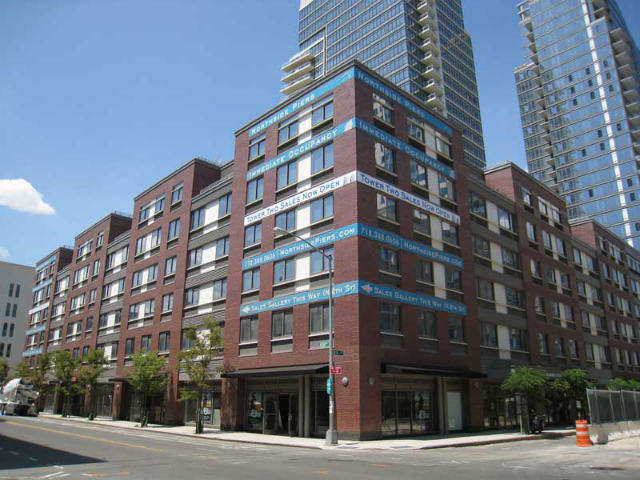 Northside Piers and its affordable component, a project on the Williamsburg waterfront that used the inclusionary housing program, image from Northside Piers

Mayor Bill de Blasio has a steep hill to climb. His plan to build 80,000 units of affordable housing over the next ten years is very ambitious, beyond what previous administrations have been able to accomplish during their times in office.

De Blasio’s plan relies heavily on inclusionary housing, a program in which developers are awarded more density in return for including affordable units. (The inclusionary housing program, or IHP, is separate from the 421-a program, which gives property tax abatements in return for setting aside 20 percent of units to let at below-market rates, though the two programs can act in concert.)

During the Bloomberg administration, the city created about 20 inclusionary housing zones, where developers can build up to 33 percent more floor area if below-market units are included. The affordable apartments can either be in the same building or nearby, and they are to be permanently affordable – an important goal in the eyes of housing advocates.

But unless the de Blasio administration is willing to rezone targeted neighborhoods to allow even larger density bonuses, inclusionary housing’s mixed record under Bloomberg suggests that most developers will skip the affordable units, forgo the density bonus, and simply build all market-rate apartments.

During the Bloomberg years, the program was generally only used for large-scale projects in high-density neighborhoods. Elsewhere, the bonus does not seem to have been large enough to entice developers to include affordable units.

The overwhelming majority of these units, though – 86 percent – were built in only two broad areas: Manhattan’s West Side and in Williamsburg and Greenpoint. Both are high-density districts with very large-scale development. Allowed bulk in the Special West Chelsea District, where the inclusionary housing program has been most successful (image from the Department of City Planning)

The inclusionary housing program was scarcely used in other neighborhoods designated inclusionary areas, like Woodside and Astoria in Queens, Flatbush in Brooklyn or the Webster Avenue corridor in the Bronx.

There are several possible explanations for this. First, the West Side and northern Brooklyn were the first neighborhoods to be designated in the inclusionary program, so they’ve had the more time to get new projects planned and finished. Other inclusionary neighborhoods were rezoned more recently, at around the same time as the housing crash.

But there was still a significant amount of market-rate housing produced in these neighborhoods since they were rezoned – 6,682 units, to be exact. Only 389 affordable units were built through the inclusionary housing program, six percent of the total, compared to 16 percent in Williamsburg/Greenpoint and on the West Side.

Again, the major difference here may be the allowable density and scale of development. The Lander report found that, “Every market rate project using the IHP bonus that we were able to identify has had more than fifty units.” In fact, on the West Side, most projects had 500 units or more.

The takeaway is that, in most areas, the size of the density bonus may be too little to entice developers to participate, especially once you consider that most of the “bonus” floor space must be used for affordable apartments.

A new building in the inclusionary program may be awarded a 33 percent density bonus if it includes affordable housing. But if you consider that most of the “bonus” floor area must consist of money-losing affordable apartments, the amount of market-rate space is increased by only five percent. In smaller developments, developers almost never find the tiny increase worth the hassle.

(A common misperception is that the inclusionary housing program requires that 20 percent of a building’s floor area be affordable. In fact, it allows 1.25 square feet of additional total floor area for every 1 square foot of below-market space.)

For example, portions of Myrtle Avenue in Bed-Stuy are designated inclusionary housing areas. On a hypothetical 1,000 square foot lot, a developer may build 4,200 square feet of residential space.

If you’re feeling confused, you’re not alone. Developers find the program to be confusing and time-consuming, which may be another reason many choose not to use it.

Though the amount of bonus is relatively small, there are some instances in which it is very valuable. The added density usually results in a taller building, and floors at the top floors command higher rents. Again, the value of the density bonus is greater in zones that allow denser, taller buildings.

Mayor de Blasio has made the inclusionary housing program a central component of its affordable housing strategy. From the city’s standpoint, inclusionary housing is very attractive because it costs the city nothing. But as the program currently stands, it does not seem likely to generate a substantial number of affordable units on top of what would already be created with 421-a.