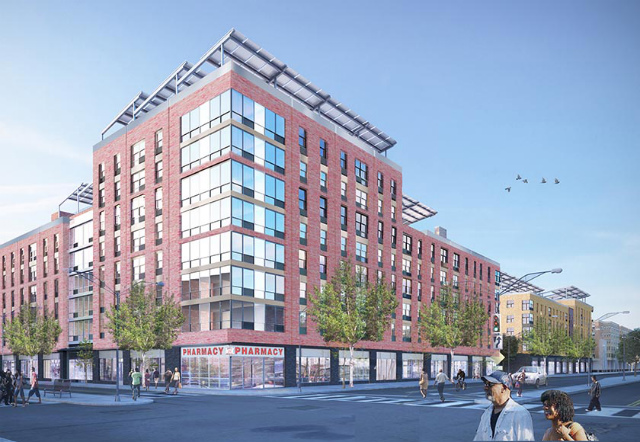 The Hudson Companies will break ground soon on the third phase of their Gateway Elton Street affordable housing development, which will bring 659 apartments and 70,000 square feet of ground floor retail to the Spring Creek section of Brooklyn, often thought of as part of East New York.

Hudson Companies is developing the entirety of the project, and brought Dattner in to design the third phase. Located at the corner of Flatlands Avenue and Elton Street, the final part of the development includes two mid-rise buildings totaling 357,400 square feet of floor space, with 287 units of affordable housing on a 2.5-acre site.

Organized around a central courtyard with parking and outdoor recreation areas, both buildings are designed to create strong street frontages and to reinforce the pedestrian-friendly ‘perimeter’ block design of the previous project phases. The project site is located across the street from a new school, and south facades of the buildings will face a proposed neighborhood park.

The first and second phases of Gateway Elton Street (not designed by Dattner) included affordable housing for low-income families, with some units set aside for supportive housing for those transitioning from institutional arrangements to more independent living. Completion is targeted for 2015. On all sides, Gateway Elton Street’s new apartments are separated from similarly dense configurations. To the south is Related’s suburban-style Gateway Mall. To the north is a lower-density residential zone west of Elton, and low-density industrial land east of Elton.

Dattner’s building and the others on the site strive to be more urban than New York’s post-war public housing projects, but there’s only so much any architect can do given the surroundings and their removal from public transit. If neighborhoods dominated by public housing like Coney Island and East Harlem are to avoid further decline, planners will have to rezone the areas to include denser private, market-rate development.

If there is enough demand for such investment, this could help avoid the continuation of a subsidized quasi-suburban monoculture, which is especially unfortunate in the context of a generally walkable and urban giant like New York.