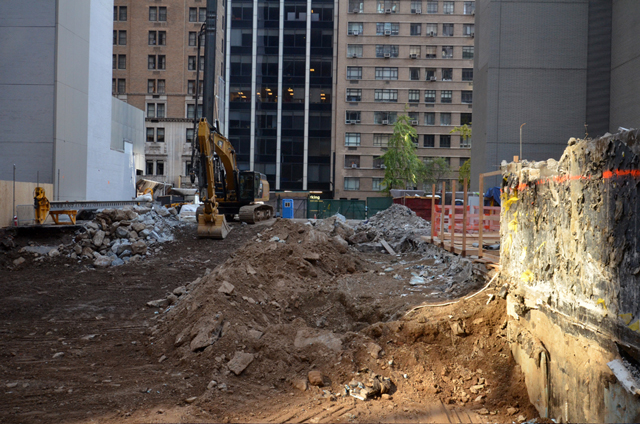 Amidst the trials of Amanda Burden, the recession and the American Folk Art Museum controversy, 53 West 53rd Street has been a long time coming. Finally, dirt is now moving, and excavation for the Jean Nouvel-designed supertall is underway, as visible in the above photo, sent in by Tectonic.

The finished product will stand 1,050 feet tall – which would have, back when it was approved, made it the tallest residential building in Manhattan. It was originally slated to be 200 feet taller, but in an arbitrary decision that seems even more absurd today given the rise of even taller as-of-right towers on 57th Street, the “Torre Verre” was beheaded by Amanda Burden’s Department of City Planning.

Hines is developing the skyscraper, which will house an expansion for the Museum of Modern Art inside its lower floors. The Torre Verre moniker has been dropped as the development has moved closer to the marketing phase, with 53 West 53rd Street now favored instead.

Building permits for construction were filed back in July, and per The Real Deal, there will be 140 apartments. Fifty-third Street is emerging as a premium street for luxury condominiums, and a penthouse at the Baccarat Tower, at 20 West 53rd Street, is currently listed for $60 million.