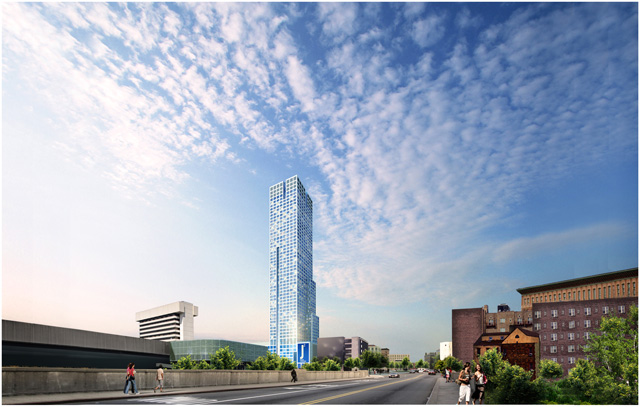 While the development industry’s attention has been chiefly focused on Manhattan and Brooklyn, the real estate boom in Jersey City is just getting started. And now, it is finally extending to Journal Square; this morning, ground will be broken on Journal Squared, which will become the neighborhood’s first project to make a mark on the regional skyline. A fresh set of renderings came attached to the news, illustrating the phasing of the project, and the eventual impact of the three-towered plan. The first building to rise will stand 53 stories tall, and contain 538 units; subsequent towers will be even larger and taller, standing up to 70 stories tall. At the street level, the skyscrapers will be rounded out by a retail base that promises to further jump-start Journal Square’s revitalization. Integrating attractive and pedestrian-friendly retail will be crucial to Journal Square’s evolution and success, and with the number of projects in the pipeline, critical mass for sustained momentum should not be difficult to achieve. Besides the first Journal Squared tower, progress is also imminent at 30 Journal Square, City Center Towers, and HAP’s 500 Summit Avenue — in addition to a host of smaller mid-rise buildings. Given the density of expected new development — with all major sites within a short walk of the PATH station — the neighborhood will likely see the most dramatic transformation of any in the New York region over the course of the next decade. By 2025, there could be five 50+ story buildings, a statistic that surpasses the current skylines of both Brooklyn and Queens. Kushner Real Estate Group is developing Journal Squared, and HWKN and Handel are the project’s architects. Completion of the first phase is expected in early 2016, and the eventual build-out will total 2.3 million square feet.