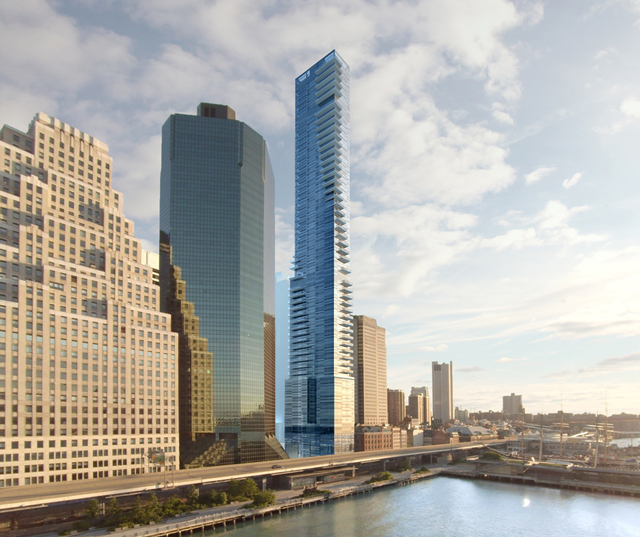 YIMBY has a fresh set of renderings for 151 Maiden Lane, a 51-story tower under development by Fortis Property Group, just to the southwest of South Street Seaport. We first revealed the Goldstein Hill & West-designed tower back in May, but the latest batch of images give a much better idea of the actual appearance. 151 Maiden Lane is located directly on the East River, which will give the project significant visibility — at least until Seaport City happens. The skyscraper will be very thin, and a glassy facade will be intermixed with balconies, which wind up the exterior in a vaguely helix-like fashion.

Permits for the development went up over the summer, and the project consists of two parts; the taller residential tower, and a shorter hotel component, where Peter Poon is listed as the architect. These images only depict the skyscraper, but Poon’s hotel will rise 33 floors and contain 271 rooms, which is impressive in its own right — but its appearance is currently left to our imagination. Base of 151 Maiden Lane, image by Goldstein Hill & West

Considering the nearby 161 Front Street, also designed by Poon, that may be for the best; 161 Front features a zebra-like blank wall that is prominent when viewed from the north, including the Seaport. Luckily, the short stature of his latest neighborhood creation should guarantee relative invisibility, as it will sit in the shadows of the 520-foot 151 Maiden Lane.

The South Street Seaport vicinity is in for several significant developments over the coming years, and Fortis’ project may be the first of the pack to rise. Howard Hughes has plans for a 50-odd story building next to Pier 17, and the firm also acquired 80 South Street, which may become the neighborhood’s tallest tower, potentially standing over 1,000 feet tall.

Per DOB filings, 151 Maiden Lane will have 74 residences divided between 140,000 square feet. While no completion date has been announced, the recent flurry of permit activity likely indicates that construction will soon begin.

Talk about 151 Maiden Lane on the YIMBY Forums