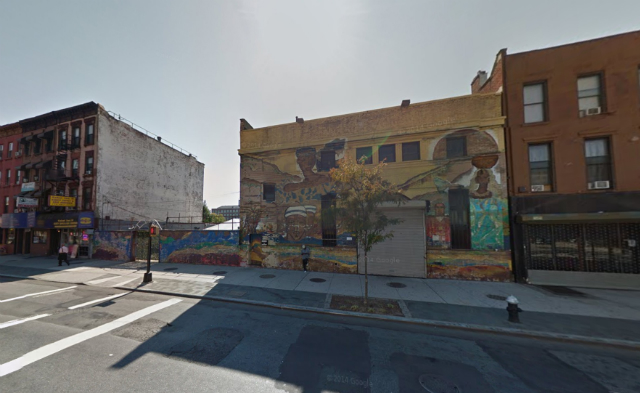 Fulton Street, along the southern edge of Bed-Stuy in central Brooklyn, is one of the borough’s busiest retail corridors. While fairly generously zoned, retail rents are high enough that redevelopment on the thoroughfare itself is rare – landlords can make far more money keeping stores open than shutting down and forgoing a few years’ income to take a risk on a new building.

But vacant lots and structures still offer a few opportunities for development along the shopping strip, as with the empty and underused lots on the south side of the street between Brooklyn and Kingston Avenues, through to Herkimer Street.

There, the CS Real Estate group, with Moses Strulowitz listed on the permit as a principal, is seeking to construct two buildings, designed by Karl Fischer, with 74 units total.

The first would be a seven-story apartment building at 1430 Fulton Street. At 74 feet tall, the development would rise far beyond the height of most of the low-rise structures nearby, and would include 47,000 square feet of residential space and 12,000 square feet of ground-floor retail. Its 64 apartments would average 730 square feet each – a likely sign that the building will be rentals, though the person who picked up the phone at the developer’s office told YIMBY that the project is still in the planning stages and no decisions have been made.

Behind it, the developer is looking to build another six-story, ten-unit building at 293 Herkimer Street. That building would have much larger units – 10 spread over 12,000 square feet of residential space, for 1,200 square feet per apartment on average. Combined, the sites would have room to park 50 cars.

The land – which is mostly vacant, besides a derelict three-story structure – was picked up earlier this year for $11 million, or nearly $190 per buildable square foot.