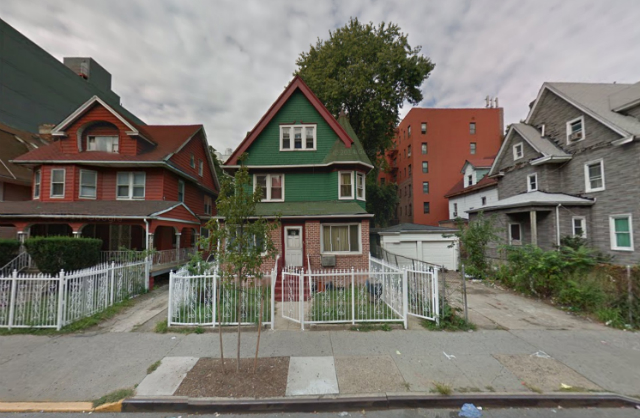 Brooklyn’s most prolific designer is coming to Flatbush. Earlier today, a new building permit application was filed by Karl Fischer Architect for a new 78-unit, eight-story project at 2100 Bedford Avenue, near the border between Prospect Lefferts Gardens and Flatbush proper.

The building is planned to rise mid-block between Lenox Road and the intersection of Caton Avenue and Linden Boulevard, replacing a Victorian-style single-family detached home that escaped the Flatbush building boom of the 1920s and ’30s to survive until today. (While the loss of the old home may pain some, none of Flatbush’s apartment buildings – now housing the majority of its population, including nearly all of its low-income immigrant population – would exist if not for Victorian teardowns.)

The new building is slated to have its 78 apartments spread over 60,000 square feet of residential space, for an average unit size of 770 square feet, likely indicating rentals. The units will be relatively evenly spread throughout the eight floors, with between nine and 11 apartments per floor above the ground level (which will have just three).

The project would include 39 parking spaces on the first floor (which probably won’t do good things to the project’s pedestrian perspective) and in the cellar, or exactly the number required by the city’s pro-car outer borough zoning code.

The developer is listed as Floral Park-based Metropolitan Homes, led by Effie Dilmanian. They bought the property earlier this year for $940,000, or just over $15 per buildable square foot.

A few lots down, new buildings at 2217 and 2233 Caton Avenue suggest that the market monthly rent for newly built two-bedroom apartments in the neighborhood is in the low- to mid-$2,000s.