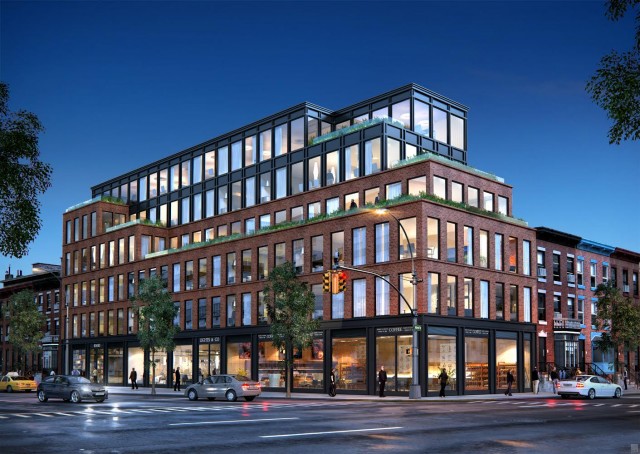 On the border of downtown Brooklyn and Boerum Hill, a new seven-story luxury residential building is in the works, according to a permit application filed with the Department of Buildings this morning by architect Morris Adjmi.

On an L-shaped parcel at the corner of Nevins Street and Atlantic Avenue, stretching over to a mid-block portion of Pacific Street, Varick Street-based Avery Hall Investments, in partnership with the Aria Development Group, is planning to develop the building at 472 Atlantic Avenue, which also goes by the address 465 Pacific Street.

The project’s 31 apartments will be spread over nearly 57,000 square feet of residential space, yielding an average condo-sized unit of more than 1,800 square feet. (The developers paid a record $373 per buildable square foot for the land, plus untold amounts for air rights from adjacent low-rise structures.)

The building will be divided between a “north building section” and a “south building section,” according to the Schedule A filing, with retail on Atlantic Avenue (7,000 square feet of commercial space is included) and the residential entrance on Pacific Street.

Only 16 parking spaces are included in the project – exactly the number required by the Department of City Planning, never mind the site’s extremely transit-oriented location. While the city did pass a resolution in 2012 offering parking relief to developers in downtown Brooklyn, this project’s Boerum Hill address puts it a few blocks outside of that zone. If the mayor and city council are serious about moderating the city’s environmental impact, reducing housing costs, and cutting traffic deaths, they will push even further reforms to the city’s minimum parking requirements – ideally driving them down to zero, at least in highly transit-accessible outer borough neighborhoods like Boerum Hill.