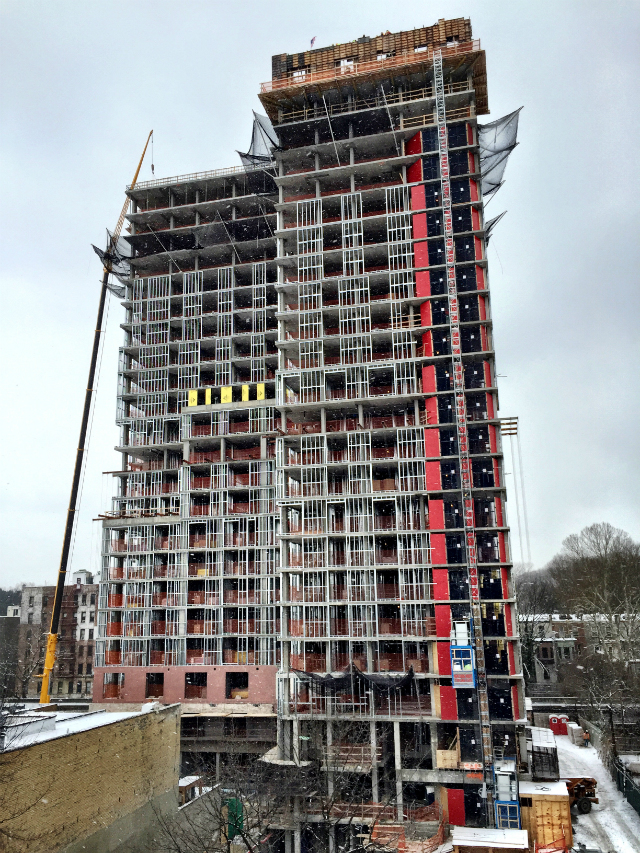 New York City has a long tradition of building towers around the edge of its parks, but the tradition isn’t as proud as it once was. NIMBYism has gripped the city, and even around Central Park – an open space defined by the high-rises on its rim – supertalls have come under fire.

High-rises have been all but banished from Prospect Park, and 626 Flatbush Avenue, which looks to have topped out a block inland from the park in Prospect Lefferts Gardens, will likely be the last major tower to grace Brooklyn’s flagship park. By cobbling together air rights from the unusable scraps of land between the buildings on Flatbush and the Brighton Line tracks that carry the B/Q trains, developer Hudson Companies is building the 23-story rental tower with sweeping views of the park. The project will bring 254 new apartments to a part of Brooklyn that’s barely seen any development since the 1960s, when a pair of shorter towers were built to the north of here. Twenty percent of the units will be let at deeply discounted rents to low-income families – exact rents will depend on household income, but a two-bedroom apartment will top at at less than $900 a month.

The building is designed by Marvel Architects, and will total around a quarter of a million square feet. It will have two retail spaces of 4,000 square feet fronting on Flatbush (with the rest of the tower set back along the Brighton Line tracks), and a 3,000-square foot community facility space.

While the tower may be the last one to be built on (or almost on) the park, it won’t be the only one in Flatbush. On the other end of the neighborhood, on Nostrand Avenue near Albemarle Road practically in East Flatbush, another 23-story tower is under development by Eli Karp’s Hello Living.

According to the developer, completion of 626 Flatbush is targeted for early 2016.