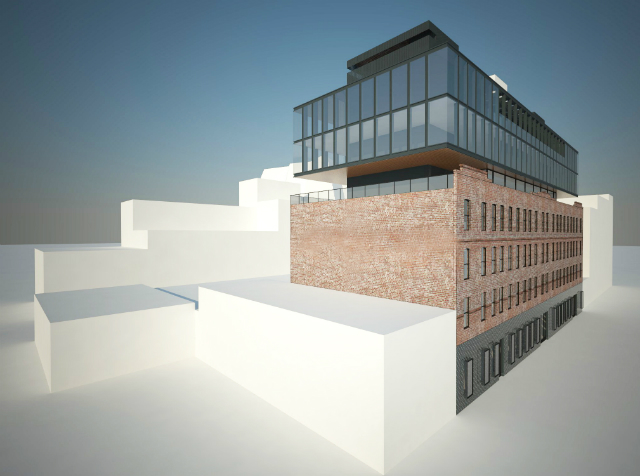 Last fall, a permit was filed to convert the four-story brick building at 520 West 20th Street – currently used as a 270-car parking garage and art gallery – into a seven-story office building. Now, YIMBY has renderings of the project, to be designed by Morris Adjmi Architects.

The plain brick base will be retained, with a three-story glassy addition, cantilevered out with more space on the sixth and seventh floors than on the fifth, added on top. Located on the south side of West 20th Street between the High Line and West Street, the project is well-positioned to capitalize on the growing cachet of West Chelsea, which, along with the broader Midtown South area, has emerged as an office destination where rents for new construction are rivaled only by Midtown East’s Plaza District.

The 50-foot-tall existing structure would more than double in height, reaching 105 feet, and its usable floorspace would rise from 63,000 square feet to 80,000 square feet, maxing out its zoning envelope. The ground floor would be occupied by art galleries and retail space, with office above.

Half a mile to the south, another Morris Adjmi-designed office building that makes use of an existing structure – 837 Washington – gives us a guide to how lucrative 520 West 20th Street may be. That building was leased in one fell swoop by Samsung, who is reportedly paying $450 per square foot for the ground floor retail space and $125 a foot for the office space above. Shortly after leasing up, the tiny 63,131-square foot building was sold for a whopping $200 million to TIAA-CREF.

Meanwhile, several blocks to the north, 520 West 20th Street sits outside of the Chelsea and Gansevoort Market landmark districts, meaning the choice to retain the old structure was voluntary on the part of the developer – a hint that, even if given larger density allotments, commercial developers in the ultra-trendy West Chelsea and Meatpacking District neighborhoods would be respectful of the existing industrial aesthetic that makes the area so desirable, and would not simply turn it into another Sixth Avenue or Hudson Yards.

Eli and James Haddad, doing business as Carolina Manufacturing Co. and affiliated with Elijah Equities, are the developers.