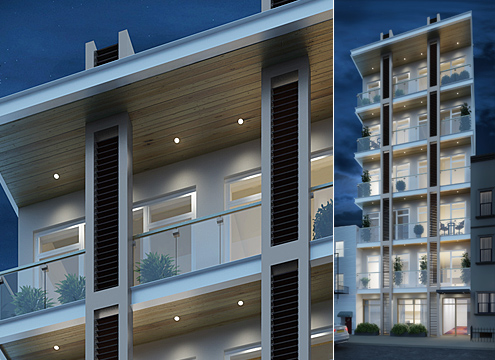 There aren’t many predominately residential areas in New York City that have been rezoned for denser development in recent years, with planners and politicians instead choosing to focus infill on commercial and industrial sites, with residential neighborhoods for the most part getting downzoned.

But Metropolitan Avenue in East Williamsburg is a notable exception, rezoned in 2009 to allow slightly higher densities (with slightly lower-density zones mapped onto the much more numerous side streets).

With the rezoning not coming until the market had already collapsed, there wasn’t much rebuilding on Metropolitan, but that’s changing as prices are rebounding. And unlike the rest of Williamsburg, the street seems poised to jump straight from no development to condos, without an intermediate rental stage.

One new condo project under development sits mid-block between Graham Avenue and Humboldt Street, at 764 Metropolitan Avenue. There, Mitchell and Stephen Kraus, with the Kraus Organization, are seeking to erect a slender, six-story, 10-unit condo building, whose rendering YIMBY has obtained.

The project’s 10 apartments will be spaced over more than 11,000 square feet of residential space, per the building permit. There will be two units each on the ground floor through the third, with full-floor condos on the fourth and fifth floors, and two units on the sixth, one of which will be a duplex extended up to the penthouse level. Ground-floor retail is allowed, but will not be provided; no parking is required, and none will be built.

A two-story frame house must be demolished to make way for the building. That building and some additional development rights were acquired by the developers in 2014 for a bit more than $2.3 million, or $210 per buildable square foot.