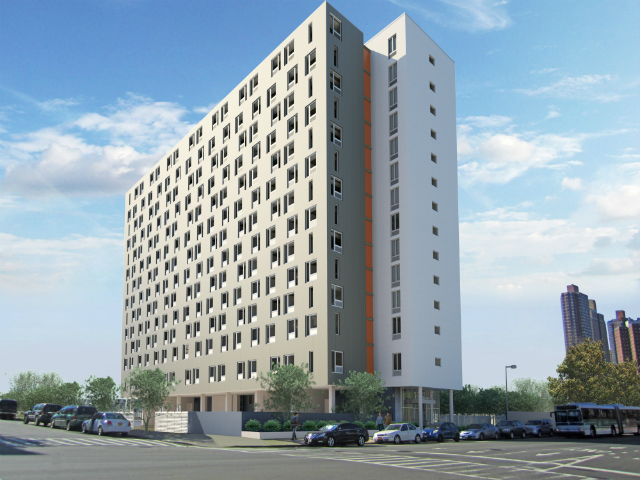 The white glazed brick postwar tower at 1918 First Avenue, beside FDR Drive, will be remade into a 203-unit subsidized senior housing project. The building is being horizontally expanded with double-loaded corridors within the same 14-story, 145-foot height, from 123,000 square feet of net floor area to 181,000 square feet, with 15 or 16 one-bedroom apartments per floor. The horizontal addition will add an entirely new face of the building, marked by irregularly placed windows.

“A low, blue-glazed brick wall screens a beautiful private garden off First Avenue,” per Dattner Architects, who helmed the redesign. SKA Marin is the developer, and they won a 99-year lease on the property from the city’s Health and Hospitals Corporation, to whom they pay $100,000 per year in rent. The building is located next door to Metropolitan Hospital (whose nurses it used to house), and may end up housing some of its former charges.

“Many seniors wind up being hospitalized for longer than necessary because of the lack of supportive housing,” a spokesperson for HHC told the Commercial Observer last year. “A safe, new affordable development with appropriate amenities for the senior population will help reduce hospitalizations and enable seniors to live in dignity as part of the community.”