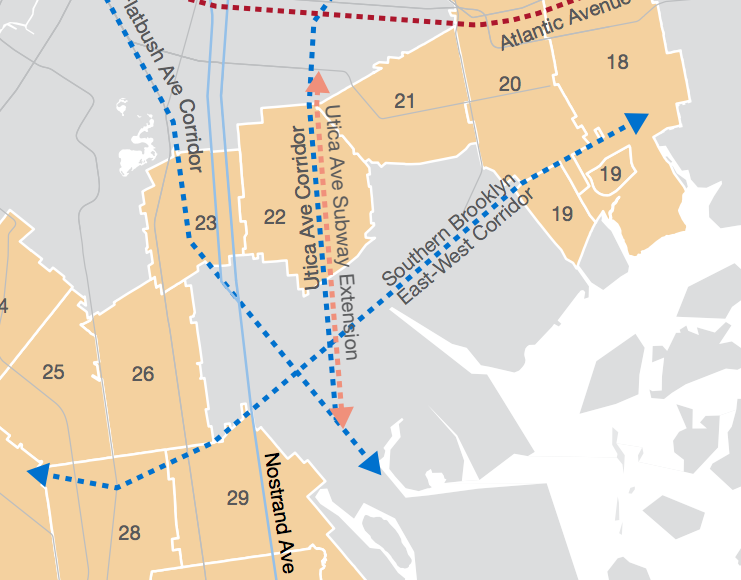 The city has had grand plans to build a Utica Avenue subway line for nearly a century, and on Wednesday, Mayor de Blasio resurrected the idea of extending the 4 train out as far as Kings Plaza in Mill Basin, bringing trains to a transit-starved area of southeastern Brooklyn.

His newly released OneNYC plan [PDF] (renamed from Bloomberg’s “PlaNYC”) calls for a study to examine a possible extension down Utica, and says that the city “supports the full funding” of the MTA’s 2015-2019 capital plan. The new line would link up with the revamped Atlantic Avenue branch of the LIRR, which would run “subway-like” service and adopt subway fares, according to the report.

But the mayor and his deputies have yet to explain how they’re going to fill the $15 billion shortfall in the MTA’s current capital plan. And his administration has promised only $40 million for MTA projects—down from the city’s traditional $100 million contribution to the agency’s budget.

However, OneNYC does reintroduce a more realistic solution to commuter woes in central Brooklyn: a new SBS bus route down Utica, supplementing regular B46 service between Bed Stuy and Kings Plaza. The B46 is the city’s second-most-crowded bus route, ferrying 50,000 people a day on a long haul trip that begins at Williamsburg Bridge Plaza and wends its way through Bed Stuy, Crown Heights, East Flatbush, Flatlands, and then finally down to Mill Basin and Marine Park. Supposedly, the MTA will launch SBS service this fall. Most of these riders would take advantage of the Utica Avenue subway. Better transit would also bring more development to these low-density swaths of southern Brooklyn, which are some of the borough’s last affordable outposts beyond the “gentrifying fringe” of Crown Heights, Prospect Lefferts Gardens and Ditmas Park.

And working class Brooklynites and new immigrants still look to these areas to rent one-bedrooms for $1,100 or two-bedrooms for $1,400. Over the last decade, most of the new arrivals in neighborhoods like Flatlands and East Flatbush come from Central and South America, South Asia and Mexico, according to Census data.

These neighborhoods have also seen 30 to 35% increases in people over 65—the city’s fastest growing population and one most in need of affordable housing.

Unfortunately, transit advocates and politicians alike are skeptical that the Utica Avenue line will ever materialize, between the MTA’s budget struggles and its inability to finish incredibly expensive projects like the Second Avenue subway or East Side Access.

“I’d like to talk about it more when the Second Avenue train is completed,” City Councilmember Jumaane Williams told the Times. “But I’m happy the mayor is talking about transportation issues in South Brooklyn, because too often it’s left out of the discussion.”

10 Comments on "Why Brooklyn Needs the Utica Avenue Subway Extension"