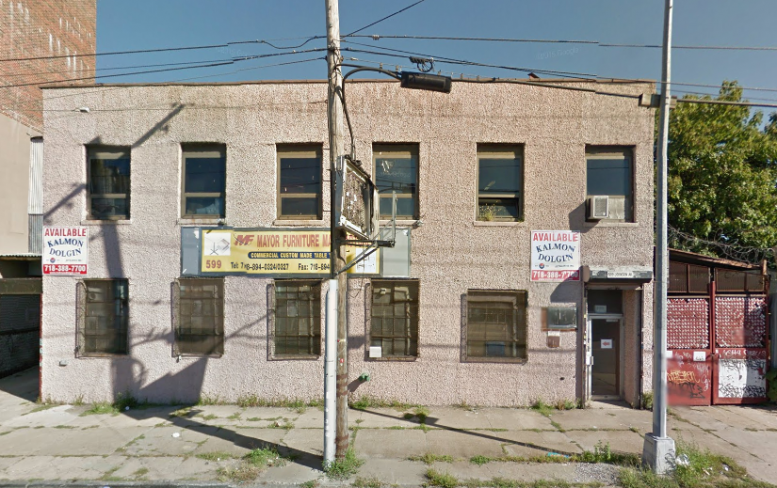 The industrial no man’s land along Johnson Avenue in Bushwick is about to become very hip, between a huge retail redevelopment planned near the Morgan L stop, and now, a nightclub conversion with a rooftop bar, planned for a warehouse at 599 Johnson Avenue, near the Ridgewood border.

Alteration permits were filed yesterday to transform a nondescript two-story building between Scott and Gardner Avenues into a bar and lounge.

Plans call for two dance halls, retail space and offices on the first floor, a bar and lounge with a kitchen on the second floor, and another bar on the roof. The former furniture factory would gain roughly 8,000 square feet of commercial space, growing from 13,866 to 21,815 square feet.

Chelsea-based Kossar + Garry Architects are handling the design, and the owner is Jon Killkelly, doing business as Bushwack 9 LLC.

This property sits well within North Brooklyn’s Industrial Business Zone, a several-mile-long stretch of properties near the waterfront that the city has kept low-rise and zoned only for manufacturing and commercial uses. In order to open a bar or restaurant here, business owners have to get approval from Community Board 1.

CB1 generally shoots down liquor license applications for anyone looking to open in the IBZ, because they worry that landlords will raise rents on the area’s industrial tenants and force them out in favor of more profitable, higher rent businesses like bars and clubs.

And night clubs have to navigate the byzantine process of obtaining a cabaret license from the city, which requires go-aheads from the local community board, the Fire Department and the Department of Buildings.

The upscale “creative community” complex nearby at 333 Johnson Avenue is also inside the IBZ, so any bars and restaurants who want to serve alcohol there will have to jump through the same hoops. Since that project promises to bring “on-site artisanal food production space,” retail and restaurants to the neighborhood, we wonder if local officials will have to start changing their policies.