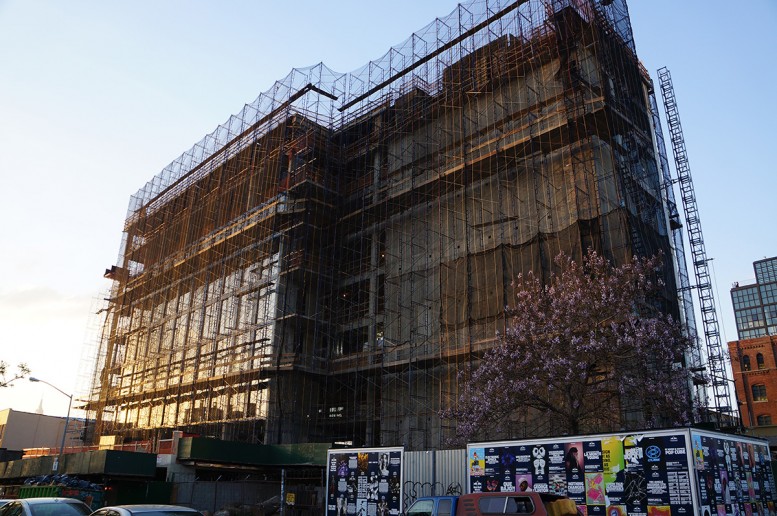 Earlier this week, YIMBY brought you an update on the William Vale Hotel in north Williamsburg, and now we’ve got a look at the creatively named Williamsburg Hotel rising nearby at 96 Wythe Avenue.

The nine-story building is getting glassy on North 10th Street between Kent and Wythe near the waterfront, but the rooftop water tower, which will house a bar, doesn’t seem to have been installed yet. When construction finishes, the development will have 160 rooms, 43,515 square feet of community facility space, and 10,178 square feet of commercial space.

Schedule A filings reveal that there will be doctors’ offices on the second floor, topped by 30 rooms per level on floors three through seven. There will also be a parking lot with 28 spaces on the ground floor. The 107-foot-tall hotel will have six different bars, including two next to the lobby, an outdoor bar on the second floor, a rooftop pool and bar, one in the subcellar, and the much-discussed 50-seat bar in the water tower.

We’re not sure who the design architect is, but the applicant of record listed on permits is David Salamon of Salamon Engineering.

Toby Moscovits’ Heritage Equity Partners is developing the project, which has made significant progress since securing a $40 million construction loan in December, as Crain’s reported at the time.

Construction is expected to wrap in fall 2016. By then, the trendy and industrially-zoned hood will have a number of hotels, including the McCarren Hotel & Pool (formerly King & Grove), the William Vale, the Wythe Hotel, and possibly a branch of London’s Hoxton Hotel chain.