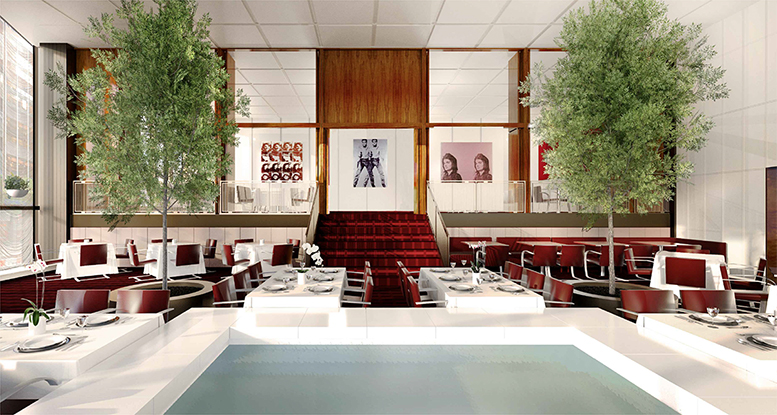 Rendering of changes to the Four Seasons pool room (NOT approved)

The Four Seasons Restaurant is a New York City icon within a New York City icon (the Seagram Building) and to say proposed changes to it were unwelcomed by the members of the Landmarks Preservation Commission would be the understatement of the week. The building, located at 375 Park Avenue / 99 East 52nd Street, was completed in 1958 and the restaurant opened one year later. They are the product of legendary architects Ludwig Mies van der Rohe and Philip Johnson, along with the firm of Kahn & Jacobs. The restaurant is a symbol of New York’s power and greatness. Most of us will never dine there, but those who have consider its spaces basically sacred.

So, when building owner Aby Rosen of RFR Holding filed plans to make changes – reportedly without telling restaurant owners Julian Niccolini and Alex von Bidder – the faithful were up in arms. The proposed changes before the full commission (beyond any minor changes such as new lighting that would be handled at the staff level) were threefold – new carpet, removing glass partitions (added by Johnson himself in the 1980s) from the grill room and replacing them with movable planters (like the ones originally there, but removed by Johnson), and removing the large walnut panel separating the pool room from private dining room on the mezzanine and replacing it with five panels, of which the outer two would be operable – making the square pool room not seem as square. The proposal was designed by architect Annabelle Selldorf of Selldorf Architects. Nobody expressed any major issues with the updating of the carpeting. In fact, the commission approved that without dissent. As for the other two proposed changes, LPC Chair Meenakshi Srinivasan told the applicant there was no reason to come back with an alternate proposal.

Srinivasan initially opened by saying it was “an interesting challenge for the commission,” which received few applications involving interior landmarks. “This landmark is elevated to a level where any kind of intervention would not be living with preservation,” she added.

Of the 19 pieces of public testimony, Commisisoner Frederick Bland said it was “edifying to say the least.” He said it was rare that we have a situation where less is more. Of the partitions in the grill room, he emphasized that it was Johnson himself who added them. Bland also stressed the importance of the 60’ by 60’ square that is the pool room and said the panels separating it from the mezzanine should never be operable.

Commissioner John Gustafsson said they were called there to evaluate “appropriateness in context” and said the context of this space is “special,” “complete,” “unified,” “unique,” “integral,” and “without equal.”

Commissioner Diana Chapin said, “These are features that are integral to the sense of space.” She said they are not just decorative, but have architectural meaning and value and any changes are irreparable. She said the Four Seasons is her favorite restaurant in all of new York and a “most wonderful space.”

Unlike cases of adaptive reuse, Commissioner Roberta Washington said the proposed changes are not necessary for the space to function.

One interesting note was made by LPC general counsel Mark Silberman. If they consented to the removal of anything from the landmark space, the removed items would still be landmarked and the applicant would be perpetually responsible for its storage and maintenance.

Edgar Bronfman, Jr., whose family owned Seagram, said the restaurant was “central to the greatness of the Seagram Building” and that RFR’s proposed changes display “utter contempt” for preservation and due process. Restaurant co-owner Alex von Bidder, who remembers serving lunch to Philip Johnson, who loved table 32, said, “Operating together, each element not only feeds the body, but nourishes the soul.” He called the four seasons an “oasis in the middle of hectic Manhattan.”

“I acknowledge RFR has the right not to renew The Four Season’s lease. But what is at stake here today is not the fate of a restaurant,” he also said. “What is at stake here is whether​ ownership trumps preservation, whether deception​ ​triumphs over transparency, ​​and whether the wealth, power and influence of a building’s proprietors ​can trample ​both ​the​ fundamental​ integrity of an historic space and the commission created to protect and preserve such spaces.”

Phyllis Lambert, daughter of Seagram founder Samuel Bronfman, said, “Great architecture makes great cities.” She noted that the original planters were removed because the plants kept dying and weren’t effective acoustically. She said that if the commission approved the changes, it would show that “the wishes of a wealthy developer are more important than the wishes of the city.”

The Historic Districts Council also came out firmly against the proposal. Its position was delivered by Barbara Zay.

“The Four Seasons Restaurant is an iconic space and a Modernist treasure in New York City. Its simple and streamlined rooms are enlivened and defined through innovative spatial arrangement, with multiple tiers and permanent fixtures creating intimate spaces and programmatic functions. In the Grill Room, this proposal seeks to remove one of these permanent fixtures and replace it with movable planters. HDC feels that this measure would undo the designer’s original intent, bringing the room closer to a 21st century desire for big, open floor plates, rather than the mid-20th century vision that this space continues to provide. HDC also feels that it is inappropriate to describe the glass and bronze partition as “non-original”, as it was, in fact, a later alteration by the original architect, Philip Johnson, and has been there for most of the life of the restaurant. It is, therefore, a significant component of the overall plan. The Commission may be aware that there are currently legal conversations in process about the approved transference of elements within the Interior Landmark spaces at 346 Broadway, and whether this constitutes a de-designation. The transformation of permanent fixtures into movable ones at the Four Seasons represents an effective de-regulation of those elements, similar to the situation at 346 Broadway. This leaves them vulnerable to future design changes without LPC oversight. HDC urges the Commission to avoid the emergence of a disturbing trend toward chipping away at Interior Landmarks in order to strip the LPC of its power to protect them.”

“HDC has for many years held its annual Landmarks Lion gala at the Four Seasons Restaurant, with people sitting on both levels of the Pool Room, and it works beautifully. HDC has a hard time understanding why the proposed operable panels are needed, given the expert functionality of the space. It would be a shame to tamper with what has become a classic, simply to appease a new owner’s sensibilities. Further, due to the pool’s position directly in the center of the room, opening up the panels to the upper dining space would change the perceived dimensionality and symmetricality of the room. We would also suggest that the carpet be reconsidered in favor of a more toned down color scheme.”

Michael Hall of Friends of the Upper East Side Historic Districts came to speak out against the proposal even though the building is not within a historic district. “As a Modern interior landmark, the Four Seasons is in a class by itself,” Hall said. “The most minimal change will affect the whole.”

Of the glass partitions, Christabel Gough of the Society for the Architecture of the City, said “Why would anyone want to remove this authentic improvement?” Thomas Collins spoke of the “problematic” planters and the “tranquility” of the pool room that would be ruined by the proposed changes.

Architect Robert A.M. Stern sent a representative, who said, “I fear that the proposed alterations do more than simply tweak and freshen a detail here and there but instead threaten to fundamentally alter the character of this incomparably dignified setting for dining, a meticulous and brilliant composition where every detail was carefully considered, from the design of custom tabletop items to the placement of trees.”