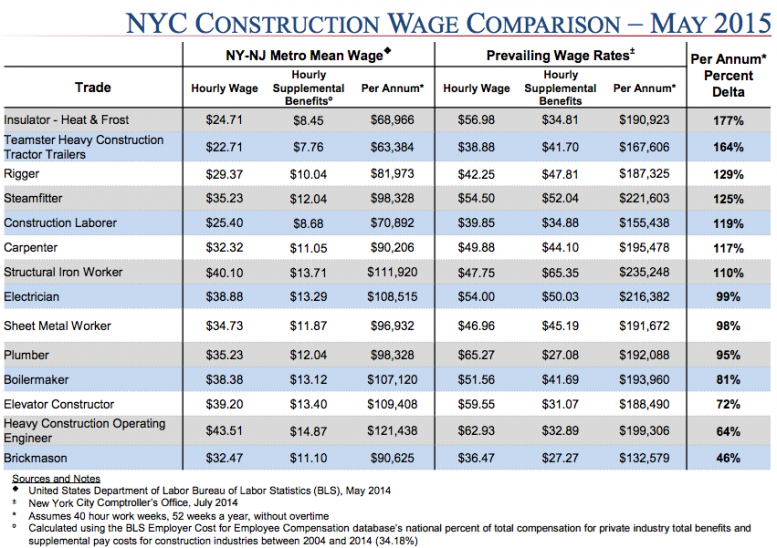 New York City’s infrastructure crisis stems from many issues, but one of the biggest problems in maintaining and expanding the city’s arteries are construction costs, which have ballooned into a stratosphere of unknown numbers and complete non-transparency on the part of city agencies. But now YIMBY has obtained data showing that salaries are up to 177% higher for unionized employees of contractors performing public works projects and building service work for government agencies than the prevailing wages of their respective private industry counterparts.

The gap in pay is unsurprising considering the lack of transparency when it comes to New York’s major public works projects, and bloated salaries often hide gross corruption in local politics. The MTA is currently seeking to close a $14 billion gap in its five-year capital plan, yet it cannot tell the public how a $1.5 billion downpayment on the second phase of the Second Avenue Subway will be spent, or what specifically it is for. Michael Bloomberg “opening” the 7 train extension, which is still not actually open. Photo by the MTA’s Patrick Cashin.

Data shows that the difference in pay is largest for insulators who make $68,996 if employed by private industry. When on the dole for government or public work projects, they make an average of $190,223, which is a jump of 177%.

High salaries in and of themselves are a good thing, but when the discrepancy is due to corruption and a lack of transparency rather than legitimate competition, the city does not benefit. Instead, New York City is faced with plans that waste billions of taxpayer dollars, with labor costs that are beyond absurd a major causative factor.