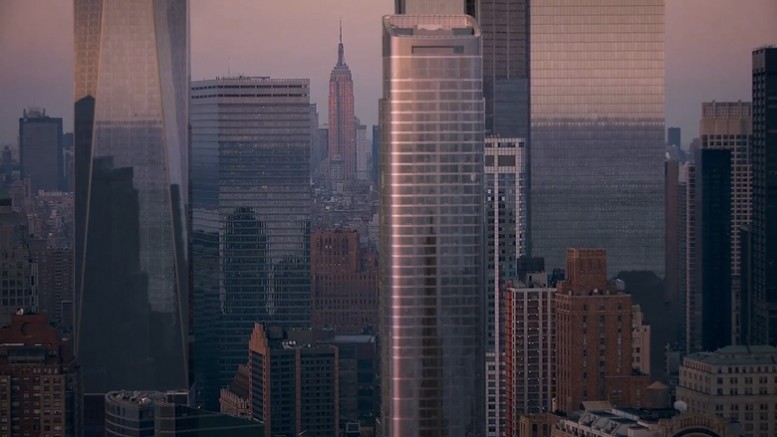 YIMBY recently featured an update on construction at 50 West Street on the YIMBYgram, and now we have a new video of what the project will look like once work is complete, likely by early 2016. Time Equities is developing the 64-story building, which was designed by Helmut Jahn.

Glass is already creeping up the tower’s exterior, and its appearance is significantly more appealing than the majority of New York’s glass architecture, which is normally replete with PTACs (50 West is fortunately immune from the scourge). The contemporary icons of the new World Trade Center stand just a few blocks to the north, but with a dearth of skyscrapers in the immediate vicinity, the 783-foot-tall building will be very visible from southern perspectives. Again to the north, a larger residential tower is planned at 125 Greenwich Street, and in the near future, a supertall may rise to the east at 42 Trinity Place. Smaller hotel projects are also underway at 100 and 133 Greenwich Street.

The saga leading up to 50 West Street’s development is a bit more complicated than any of its newer neighbors — with the exception of the World Trade Center — as the project was originally supposed to begin rising before the recession, just like 56 Leonard and 30 Park Place. Despite the fact that all were stalled in 2008, the trio should all open within a year or so of one another, starting with 30 Park Place. 50 West Street will have 191 condominiums spanning 406,000 square feet, for an average unit size measuring 2,100 square feet. SLCE is the design architect and Thomas Juul-Hansen is doing the interiors.