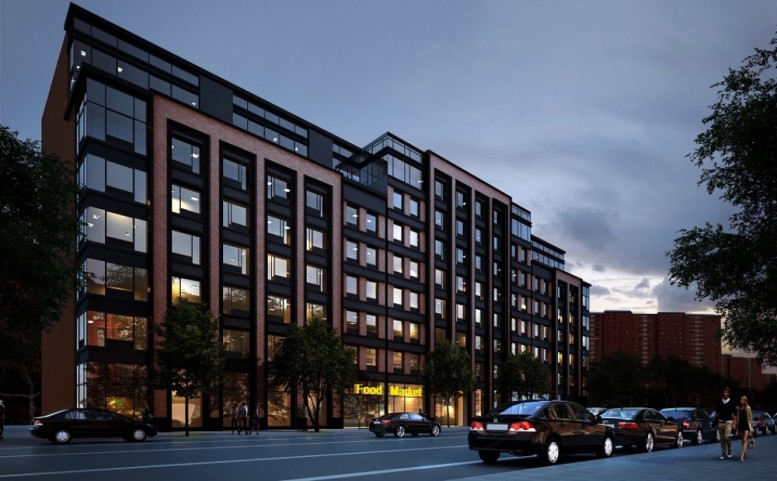 The Key Food at 325 Lafayette Avenue in Clinton Hill shut its doors in July, a few months after Slate Property Group filed plans for an eight-story residential building. YIMBY revealed the first rendering of the project in April, and now we have a better look at what will replace the supermarket next to Pratt’s campus.

Although this latest image is rendered at dusk, it offers a more realistic view of 325 Lafayette than the previous black and white rendering. The facade will be clad in a combination of red brick, glass curtain wall and black metal panels, and the project will bring a modern vibe to a block dominated by 50-year-old Mitchell-Lama towers.

More importantly, the Key Food will return on the ground floor of the new building. David Schwartz, a principal at Slate, said that after hearing how upset neighbors were about the store closing, his team negotiated a new lease with the supermarket. The developer announced the news at a public meeting earlier this month.

Plans have been adjusted slightly, but they’ve remained largely the same since we first wrote about the permits in March. The 117-unit development will have 78,367 square feet of residential space, yielding average units of just 669 square feet. The grocery store will occupy 16,146 square feet on the ground floor, and a 294-square-foot medical office will be sandwiched next to it.

Twenty percent of the apartments—or 24 units—will rent for below-market rates. They’ll likely be priced for families making 60% of the Area Median Income, or $51,780 for a family of four. But Schwartz says that isn’t certain, because the city hasn’t approved the project’s application for the 421-a tax exemption yet.

Amenities include parking for 59 cars in the cellar, a shared roof deck, and a lounge, outdoor terrace and fitness center on the second floor.

Aufgang Architects is responsible for the design.

Slate expects to have permits approved in the next few weeks, and they hope to demolish the supermarket within a month. Construction should begin in the next few months and wrap by February 2017.