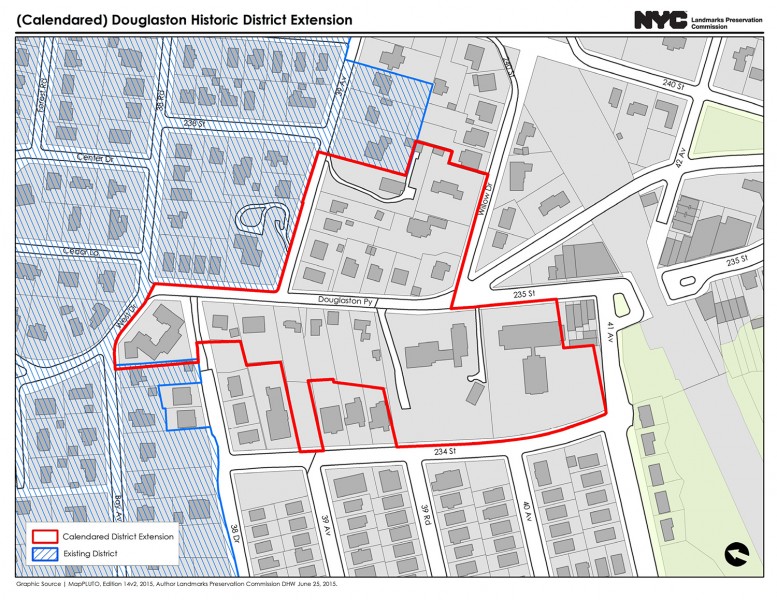 One of the more controversial items in the Landmarks Preservation Commission’s 95-item backlog is the Douglaston Historic District Extension in Queens. The proposal got a public hearing on Thursday – the first since 2008. While advocates are supporting the designation, many homeowners are tired of being left in limbo and are against it.

The proposed historic district, when proposed in 2008, covered 22 buildings (see full map), including 18 homes, a school, a church, and an apartment building. Most of those are located on or near Douglaston Parkway. If a home becomes part of a historic district, that means any changes to the exterior must first be approved by the LPC. (The LPC would also have jurisdiction over new construction.) It can be difficult for homeowners with limited resources to live up to the commission’s standards and financially burdensome to maintain the home to those standards. That can impact property values and is the reason why many of the individual homeowners called for the district to be removed from the LPC’s calendar.

Among those opposing the designation is City Council Member Peter Vallone, Jr.

Attorney Eric Palatnik, who represents 13 of the homeowners, said that it is the uncertainty that has become unacceptable. Homeowner Steven Butis said potential buyers have been driven away. Douglaston homeowner Roger White said historic districts are used as zoning tools. Another man said the proposal is “tearing neighbors apart.”

Meanwhile, State Senator Tony Avella supports the designation. He said a majority that live within the proposed boundaries support it and urged the commission to “do the right thing.” “Douglaston needs this,” said Robert Coddington, president of the Douglaston Littleneck Historical Society. The Four Borough Neighborhood Preservation Alliance Foundation, the New York Landmarks Conservancy, the Municipal Art Society, and the Historic Districts Council also voiced their support for designation. HDC’s testimony is below.

The proposed Douglaston Historic District Extension adjoins and sits between the Douglaston Historic District, designated in 1997, and the Douglaston Hill Historic District, designated in 2004, both with overwhelming community support. Together the span of three historic districts will serve as a prime example of an outer borough’s transition from rural farm communities to a diverse suburban enclave, rarely found within the boundaries of New York City. By designating the Extension, the LPC will retain the area’s historical continuum in both American architectural history and within the story of urban planning and development.

The building stock in the proposed historic district extension spans roughly one hundred and fifty years, from the early farmhouses on Douglaston Parkway to a few mid-to-late 20th century additions and infill construction. The land that comprises the proposed district extension was part of the 1853 Marathon subdivision, one of the earliest of its type in northeastern Queens. Created by the local farmer, Jeremiah Lambertson, who purchased the property ten years earlier, the land was laid out in an urban grid of large, almost one acre lots, which were sold at auction. Three buildings in the proposed district, 38-60, 38-80, and 39-18 Douglaston Parkway date from the development of this subdivision during the 1850s and 60s. Known as the Quaid Family farmhouses, they were built and occupied by successive generations of the same family from the mid-19th century into the 20th, marking the transition from large farms to smaller ones and eventually suburban estates. Although they take the form of vernacular farmhouses, they do illustrate some design details of the Greek Revival and Italianate styles. Other homes in the proposed district are from the suburban development of Douglaston built between 1890 and 1930 in the Revival styles for which the area is known and display the same fine details and design that are found in the Douglaston and Douglaston Hill Historic Districts.

Other buildings are from the area’s development and suburban growth from 1890 to 1930. Once the railroad tunnel to Manhattan was installed, Douglaston evolved into a commuter community and an early example of suburban sprawl. The period from roughly 1890-1915 was transitional, with architects and builders experimenting with a combination of styles, creating an eclectic mixture of buildings. While many houses can be classified as belonging to one distinct style of architecture, such as Colonial Revival, Arts and Crafts, and Classical Revival, others featured a fusion of design elements. Post-1915 styles reflected the Revival period, with the Colonial and Tudor Revival represented in several houses in the Extension.

The inclusion of the 1930-31 Public School 98 and the 1923-24 Community Church of Douglaston helps round out the story of Douglaston as a community. Both institutions were designed in the Colonial Revival style to harmonize with the architecture of the neighborhood while meeting the educational and spiritual needs of its residents. A 1928-30 Tudor Revival style apartment building, which has many of the same details as the single-family homes, tells another part of the region’s story, when the growing population necessitated the construction of multi-family dwellings between the World Wars.

The proposed extension is significant as an example of mid-19th century and early-20th century community planning and development, as well as the buildings’ high level of architectural quality. Most of the buildings retain the forms and characteristics of popular architectural styles from the 1890s to 1920s. The proposed Douglaston Historic District Extension was part of the community’s original hope and extensive plan for an historic district, and was calendared and heard in 2008. It is our hope now that the LPC moves forward towards designation. It is only fitting that this area, whose architecture and history are equal to that of the existing districts, be similarly recognized, protected and preserved.