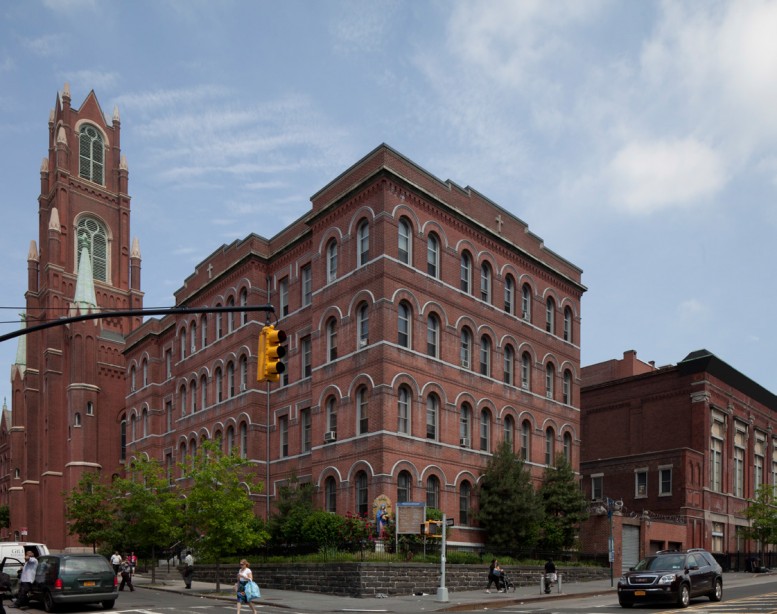 The red brick South Bronx church was designed by architect Henry Bruns in the Romanesque Revival style and completed in 1887. It features a 125-foot-tall tower, round-arched openings, and small blind arcades. The convent has projecting end sections and the priests’ resident has a detailed cornice. The campus is still in operation.

The previous hearing on this site took place on July 8, 1980. At that time, two people spoke out against designation. The community board and borough president also stated opposition.

This time around, opposition continued. Joseph Rosenberg, executive director of the Catholic Community Relations Council of New York, spoke of the financial burden it would place on the church and said there is no public funding that would help. Landmark designation would mean the church would have to maintain itself to the LPC’s standards. Immaculate Conception’s Rev. Francis Kelly spoke of not having the money to replace a slate roof and having to use asphalt instead. If the church was landmarked, it would likely have had to replace the roof in kind. Similarly, a spire that was falling apart would have had to have been replaced instead of removed.

Opposition to designation was not universal as nobody had anything bad to say about the campus. Howard Yourow of the Four Borough Neighborhood Preservation Alliance said designation would boost spirits in the South Bronx. Andrea Goldman of the New York Landmarks Conservancy noted that it is the Bronx’s largest religious campus. Mark Hendricks of the Municipal Art Society voiced his organization’s support for designation. The Historic Districts Council’s Kelly Carroll also voiced support for designation, noting the church was conceived for a large German population. Her testimony is below.

Individual Landmark designation of the Immaculate Conception Church is an opportunity to grace The Bronx, an under-landmarked borough, with protection of its architectural heritage. Currently, The Bronx has only three landmarked churches, none in the timeless Romanesque Revival style. This neighborhood, and the borough, has come a long way from the darker days of arson and crime. The survival of this remarkable complex throughout its history, good and bad, is a testament to its firm grounding in its community.

This church complex was conceived for a vast German population, which was the largest ethnic group in The Bronx at the turn of the century. The tripartite façade of the church building boasts four rose windows tucked behind rounded arches and clustered colonettes, and is flanked by two turrets, lending a fortress-like appearance. The warm red brick features limestone detailing, delivering a handsome polychromatic composition. Collectively, the complex constitutes a cohesive and attractive streetscape.

Through decades and waves of immigration, Immaculate Conception Church has graced the South Bronx with its beauty, and astonishingly remains intact. We urge the Commission to designate the church as an Individual Landmark. The biggest gift the church could bestow on its community a continuation of the stability it has provided for over a century in a place of constant change. Just as cathedrals are revered in Europe, structures like Immaculate Conception are our future cultural patrimony.

Final Phase of $1.7B Hunts Point Access Improvement Project Kicks Off in the South Bronx

Permits Filed for 409 East 158th Street in Melrose, The Bronx

Permits Filed for 450 East 158th Street in Melrose, The Bronx