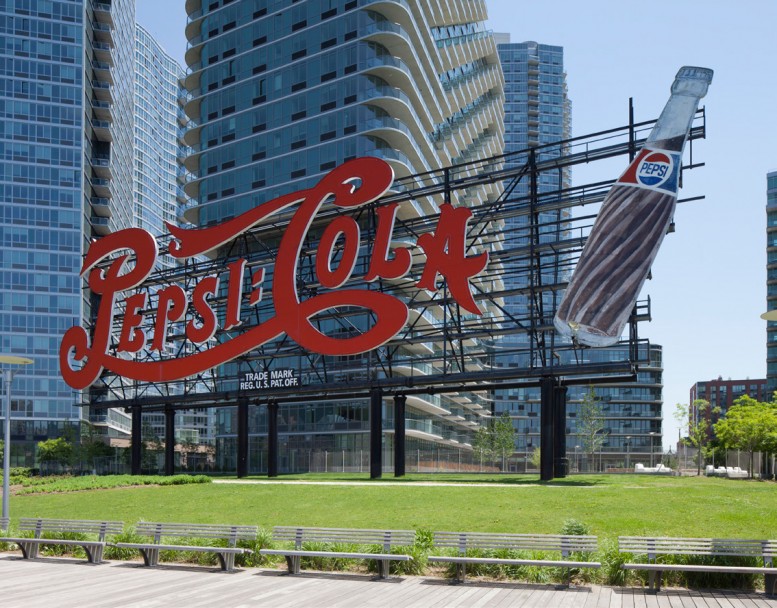 A New York City icon is back on track to become a permanent fixture. On Thursday, the Landmarks Preservation Commission began the process of clearing its 95-item backlog and the day’s session included the items from Queens, the city’s largest borough by area. Among those items was the Pepsi-Cola sign. Almost nobody testified against designating it a landmark.

The 120-foot-long neon sign was built in 1936 by the Artkraft Strauss Sign Company and sat above a Pepsi plant along the East River until 2004, when the disused building below it was destroyed. It was dismantled, restored, and moved into what is now Gantry Plaza State Park in 2009. It currently sits there, lit up at night, and owned by Pepsico. A proposal to designate it as a landmark went before the LPC back on April 19, 1988 and July 12, 1988.

Susan Cleary of the Queens Preservation Council supported designation, calling it a “beacon for East River traffic, the Upper East Side, and the United Nations.” She noted that the “P” and the “C” are each 44-feet-tall.

Designation of the sign has the support of the Historic Districts Council, which represents over 500 organizations across the city. Leo Blackman’s testimony is below:

The Pepsi Cola Sign has illuminated the East River waterfront since 1936. While not a traditional “landmark” since it is neither of a high style nor affixed to a high-style building, the Pepsi Cola sign does add a special character to the all-but-developed Long Island City. Tastes and definitions of landmarks continue to change, as does New York. Public perception of the quotidian sights of our city, like signage, can evolve quickly once something that has always been there, suddenly, is not.

HDC cites the lost Eagle Clothing and Kentile signs as two examples of character-defining, albeit non-traditional, beloved facets of the industrial Gowanus. The dismantling and erasure of these signs’ presence in the neighborhood was lamented by neighborhood residents and beyond, signifying anxiety that those companies’ industries are defunct, and change is certainly coming to this Brooklyn enclave.

As a nod to the departed industry which was once the dominating presence in Long Island City, the Pepsi Cola sign was preserved, long after its host building was demolished. HDC would like to see this sign preserved in perpetuity, as its presence is preferred there, as opposed to losing it. In 21st Century New York, vestiges like this remind us that we manufactured things in this city before we built condos. Understanding the intricacies of regulating commercial signage, HDC would further recommend that the Commission investigate additional preservation protections, such as an easement or some other form of legal contract to help ensure this landmark’s continued presence.

It also has the support of the Municipal Art Society and the New York Landmarks Conservancy, along with at least one member of the public.

Tour guide Matthew Baker cited its “graceful elegance.” He also relayed an urban legend about actress Joan Crawford and the original positioning of the sign. As the story goes, Crawford, who was the widow of Pepsi CEO Alfred Steele, was denied approval to live in the River House co-op, where former Coco-Cola president Robert Woodruff was on the board. So, Crawford had the sign placed smack in front of the River House.

There was some opposition to designating the sign a landmark. Pepsico’s Richard Wilcox said that the current agreement that governs the sign’s upkeep makes it unnecessary. Christabel Gough of the Society for the Architecture of the City said this is the first time in her organization’s history that she has opposed a designation. She noted that the LPC cannot govern content or use (in other words, the LPC can tell you your building is too ugly to be built, but can’t tell you what you’re allowed to do inside it). She reasoned that all the LPC could take jurisdiction over is the bottle itself.