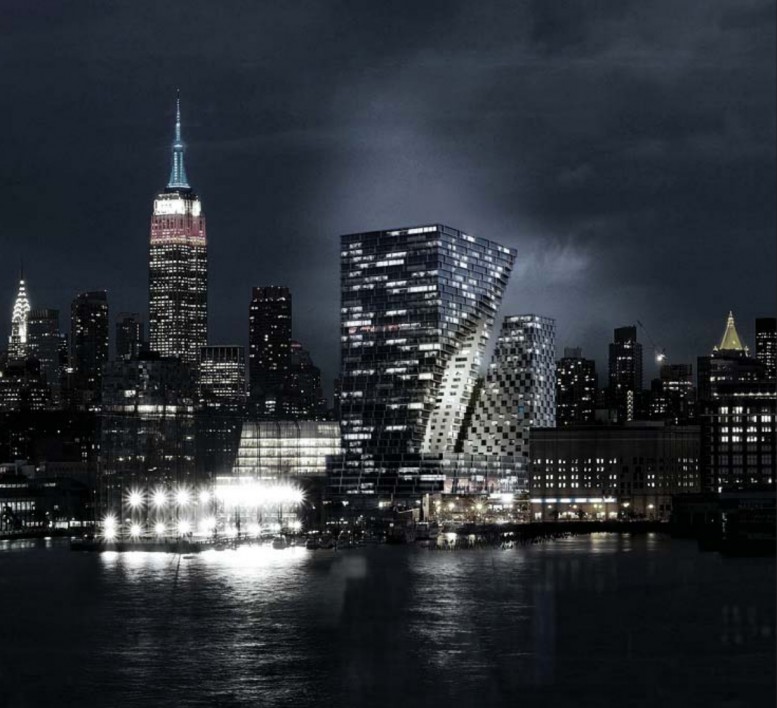 While the length of the High Line has seen a surge of construction since the elevated park initially opened, there are still a few major sites that remain ripe for new development. Perhaps the largest such parcel is at 76 11th Avenue, between 17th and 18th Streets, which was acquired by HFZ Capital for $870 million back in April. Now, YIMBY can reveal the site’s preliminary plans, created by Bjarke Ingels Group. The project will total nearly 800,000 square feet, and will be split between two buildings. The western tower will rise 402 feet while its eastern counterpart will stand 302 feet, and both will sit atop an active base featuring a major retail component as well as a hotel.

Retail will span the entire first floor, and per stacking diagrams, the space could also include a gallery. The next three floors will feature a hotel, as well as the residential amenities, which will be arranged inside the hotel, surrounding a courtyard.

Old plans had the hotel extending through the shorter High Line-facing building, but the most recent version has turned both towers entirely residential. The massing of the structures is defined by a diagonal cut through the site, which would allow units on the southern edge of the western tower to see the High Line. Evidently it made more financial sense to position the hotel immediately above the base, where its bulk would also help boost the relative height of both residential portions. This also freed up the eastern tower for condos.

The other side-effect of this massing is the production of more valuable residential space than typical projects in this neighborhood. Due to outdated zoning, none of the area’s new development is anywhere near as tall as this, but luckily 76 11th Avenue is as-of-right, which is partly why it sold for $1,100/square foot.

In any case, the larger tower’s massing up top will be unprecedented in New York City, acting like an inversion of “normal” development plans. The negligence of local government to address the zoning crisis is now pushing design for market-rate projects to absurd (but nevertheless attractive) conclusions using solutions that also make affordable price-points untenable.

Still, the project itself will be beneficial, restoring a long-dormant block that sits immediately northwest of the Meatpacking’s beating heart of Chelsea Market. The owners of that building also wanted to expand, but faced major hurdles from local NIMBYs and had to reduce the scale before approval was granted in 2012.

Since then, construction has also started on a 25-story hotel immediately to the south of Chelsea Market, at 414 West 15th Street. But that project will pale in comparison to 76 11th Avenue, which will stand far taller than any buildings in the general low-rise neighborhoods surrounding the 14th Street corridor.

Per the NY Post, Rem Koolhaas originally submitted a proposal alongside Bjarke Ingels Group, but evidently BIG has taken over the entire project. The plans may still see additional modifications, but a preliminary completion date of 2018 has already been announced.