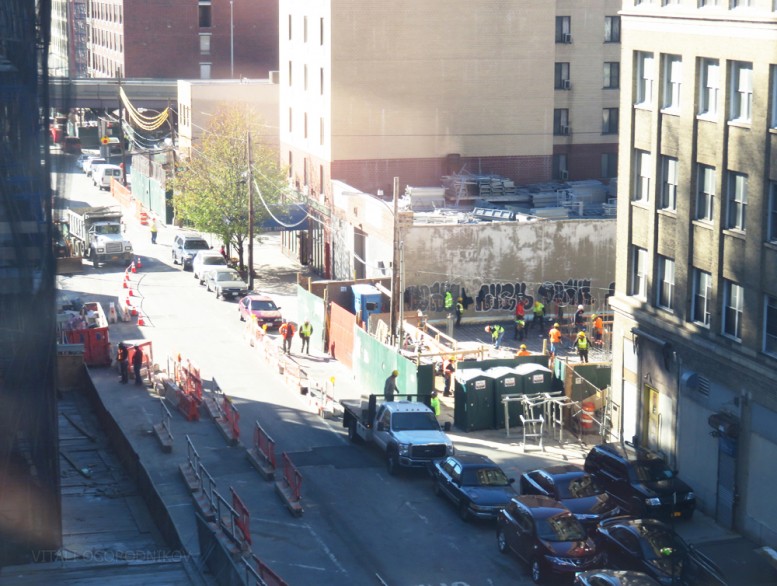 Over the past month, 42-14 Crescent Street, a 48-unit residential building in the Queens Plaza district, has reached ground level and is ready to rise to its full 13-story height. The project is being developed by Meadow Partners and has been designed by John Fotiadis Architect PLLC. The mid-block high-rise is yet another addition to Crescent Street’s rapidly growing street canyon. Since construction began during the last decade, the Crescent Street block north of Queens Plaza has become Long Island City’s first true high-rise corridor, with the block-long street wall completed when 41-07 Crescent Street took shape earlier this year. The location made perfect sense for the first leg of Long Island City’s residential development, given its location directly next to the Queensboro Plaza subway station. The ornamented elevated station sits directly above the Queensboro Bridge approach, which blocks off through traffic at Crescent Street and separates it into distinct north and south portions. Crescent Street looking southwest, with 42-15 Crescent under construction on the left and 42-14 on the right

The blocks to the south did not enter the development phase until recent years. While the pace is slowing down at its northern counterpart, the portion between Queens Plaza South and Rafferty Triangle is a busy construction zone. Four multi-unit residential projects are currently going up along the three block stretch, including the conversion at 42-15 Crescent directly across the street. At least two more large developments are being planned.

Within this dense context, the project reads as a tasteful example of mid-block infill, hinting at local context while maintaining a distinct personality. The building slab, which faces its narrow side toward the street, is massed in the form of two symmetrical, staggered sections, separated by vertical metal bands that also provide definition for the corners and all exposed edges.

While the brick finish is contextual to almost every neighboring building up and down the street, the combination of brick with metal accents is more reminiscent of Factory House a block south, though 42-14 Crescent expresses the theme in a distinctly vertical fashion.

The crown recedes in subtle setbacks, integrating the flush, vertical façade with the recessed bulkhead while allowing space for a green terrace. The lot walls are almost entirely unadorned, in rightful expectation of future neighbors on either side. Across an alleyway to the north stands 24-16 Queens Plaza South, a five-story, pre-war office building clad in tan brick and trimmed with limestone. The building has seen better years. It could use a power wash and new ground level retail, though it is also likely that it may be demolished in favor of denser development. The alley is currently used for construction staging. The single story, windowless garage to the south is a standard representative of the area’s pre-development composition. It is more akin to the Grace Fellowship Church that used to stand at the 42-14 Crescent site. While churches make for a positive presence in any community, the two-story building, with a mismatched metal façade and a windowless ground level, was an eyesore.

There will be a small, planted yard sandwiched behind the building and walled in on three sides.

Queens Plaza South offers a low-key but vibrant stretch of shopping and dining, and Manhattan is a few minutes away by subway, car, or bike via the Queensboro Bridge. The building itself will provide the neighborhood with 750 square feet of retail. On the other hand, traffic congestion and elevated train noise are to be expected at this busy urban junction.

Although the building will rise several floors over all of its immediate neighbors, sweeping vistas are not to be expected. Much taller apartment buildings of equal or much greater height rise on surrounding blocks in all directions, but glimpses of the Manhattan skyline, the bridge’s ornate metalwork, and the vast expanse of Queens will be visible from the upper floors. All in all, 42-14 Crescent appears to be an understated but effective example of infill that will have a positive impact on the rapidly evolving neighborhood.