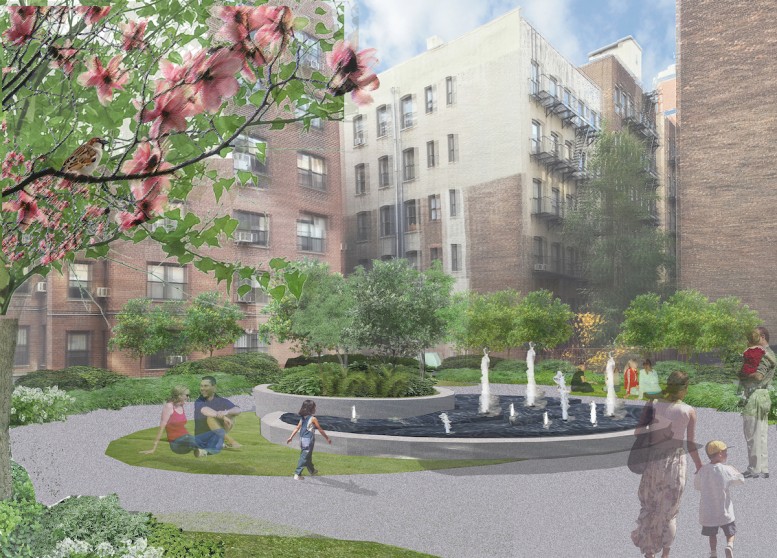 When two developers decided to build 10 stories of condos on top of an occupied, rent-stabilized apartment building at 711 West End Avenue on the Upper West Side, tenants were predictably upset. To appease the renters, many of whom have lived there for decades, the landlords plan to renovate and add new amenities to the seven-story brick building between 94th and 95th Streets.

The renovation will create a 5,000-square-foot landscaped terrace with a fountain on the second floor, on top of the building’s garage. YIMBY has a rendering of the roof deck, which will complement a new garden around the main lobby on West End Avenue. Developers SJP Properties and P2B Ventures will also redesign the lobby, adding a reading room, package room, and more recreational space. They’ll replace all the windows, update the elevators and hallways on each floor, and install a new energy-efficient HVAC system with central heating and air conditioning.

The new condos will be structurally separate from the existing, 144-unit building, which was constructed in 1952. 711 West End Avenue stretches a full block and wraps around from 94th Street to West End Avenue and then to 95th Street, creating a big U-shape with a large interior courtyard. Ten steel support columns, tucked away in the corners of the building, will support the new structure. A big concrete and steel platform stacked on top of the columns will suspend the new building six feet above the old one.

Both buildings will share the same lobby, and a second, new entrance will be carved out of the 95th Street side of the old structure. Workers will also cut a new elevator shaft and fire stairs to link the old building with the new one. The elevator shaft will replace a column of studio apartments, where one of the residents initially refused a buyout and an offer to move to a different apartment. The longtime landlords and their management company, Kaled Management, started an eviction case against the tenant. But the developers say the issue was “amicably resolved,” and the tenant agreed to move out.

And the new facade will take design cues from its 1950s predecessor, incorporating windows that wrap around the corners and brick fins in between some of the windows. The property sits inside the newly expanded Riverside-West End Historic District, but the developers secured their building permits only a few weeks before the Landmarks Preservation Commission extended the boundaries.

The project didn’t need LPC approval, but developer Paul Boardman insists that he hired PBDW Architects because they’re in “the top tier of the nation for historic architects.” “We see this new project as something that produces a piece of architecture that does justice to the West End Avenue legacy that’s there,” he added.

The old building will be shrouded in protective scaffolding, but only in sections. It will never be completely scaffolded, in an effort to minimize the impact on residents.

Construction is supposed to start in the next few months and continue until early 2018. The first phase of work will take place in the garage on the ground floor, which will be closed until the new condos are finished.