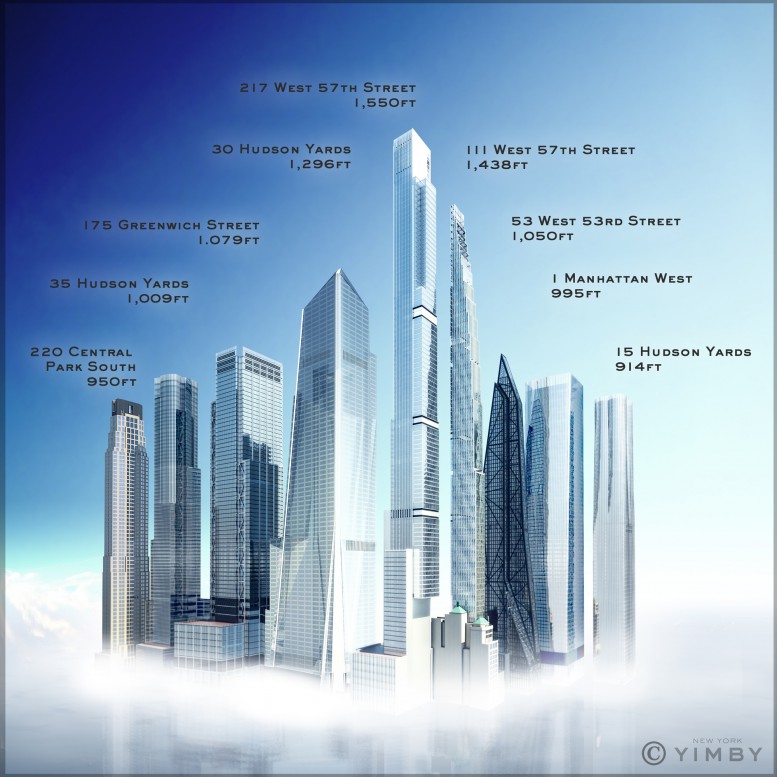 The rise of the supertalls has been several years in the making, and One57, 432 Park Avenue, and One World Trade Center have offered a preview of the increasingly gargantuan changes taking place across New York City. But 2016 will mark the start of a new era for the city’s skyline. With six supertalls of 300 meters (984 feet) or greater now rising, the city’s total number of such buildings will nearly double, from seven to thirteen. Yesterday, the New York Post featured YIMBY’s compilation of the towers, and today we wanted to give our own rundown on the image (hi-res at link) and its implications for our continually-changing city.

Manhattan long held the title of the world’s most impressive skyline, with the boom of the 1920s cementing the island’s status as the skyscraper capital of the globe. The Chrysler Building (at 1,046 feet) and the Empire State Building (at 1,250 feet) marked the city’s first official supertalls, and the ESB held the title of the world’s tallest building until the Twin Towers of the original World Trade Center were completed in the early 1970s.

Following 2001, the uptick in supertall construction began gradually, and was exclusively focused on office development. Both the Bank of America Tower (1,200 feet) and the New York Times Building (1,050 feet) rose prior to the 2008 financial crash, but it wasn’t until 2012 that One World Trade Center topped-out to reclaim the mantle of king of the Downtown and overall Manhattan skylines.

Given all this, it is surprising that critics deride some of the new buildings as “Hong Kong on the Hudson” when cities like Hong Kong have long looked to New York as inspiration for their own skylines; it is not coincidental that the term for rapid vertical densification is Manhattanization.

History has quickly been forgotten by selfish NIMBYs who have hijacked the city’s preservation processes, twisting them to prevent development rather than support architecture legitimately worthy of landmarking and preservation. This has resulted in exorbitant real estate prices, endangering the neighborhood dynamism that makes New York so vibrant and attractive to locals and tourists alike.

While the Municipal Arts Society may serve some decent purposes, the organization has recently taken to spreading images where gigantic orange blobs supplant the designs of future buildings – and then alleging that developers are the ones who are misinforming citizens. Though Extell hasn’t been forthcoming with designs for 217 West 57th Street, YIMBY has nevertheless revealed that tower’s design, along with all the others coming to the 57th Street corridor — each of which will offer a unique and contemporary contribution to the skyline, while also marking an end to the epoch of the mundane Midtown plateau.

At the ground level, NIMBYs have used similarly nefarious tactics to fight for nostalgia instead of common sense. While the demolition of Rizzoli’s former home at 31 West 57th Street was no great loss — and in fact, the store has already re-opened in a new location — Chickering Hall’s demolition just a few doors down was met with nary a peep from anyone besides YIMBY.

Perhaps more egregious than the orange blob tactics of the MAS or the rantings of ne’er-do-well cheerleaders like Gale Brewer is the effort by NIMBYs in Midtown East to kill plans for a 900-foot-tall residential tower at 428 East 58th Street, under the guise that it would not be affordable. This is particularly rich coming from opponents within a census block that already ranks within the top one percent of tracts across the country in terms of income.

The aforementioned anecdotes highlight the hypocrisy of a significant portion of the city’s aging population of Baby Boomers, who would rather entomb New York City in a sarcophagus of red tape than come to terms with the fact that things may be just as good as back when they were 25.

Despite the ill-advised protests against positive change, there are many bright spots. In fact, the Municipal Art Society’s old headquarters at 111 West 57th Street – known as the Steinway Building – is getting a full overhaul. Once decrepit and lacking air conditioning, the building will be beautifully restored, refurbished, and integrated into the new Steinway Tower, designed by SHoP Architects. While rich NIMBYs may be adept at lobbing orange blobs across the internet, it was ultimately the developer of a supertall that came to restore and save the MAS’ former headquarters.

If anything, 2016 should mark a firm end to the faux-outrage by people who think shadows don’t already exist over Central Park – or at least the end to any pretense of potential action. 217 West 57th Street, the tallest of this year’s supertall crop, is already several stories above street level. Once complete, the Nordstrom Tower, a.k.a. Central Park Tower, will rise 1,550 feet to its roof, easily clinching the title of the city’s tallest roof from the 1,397-foot-tall 432 Park Avenue. Across the street, 220 Central Park South is also nearly a dozen floors above street level, on its way to an eventual pinnacle 950 feet above the streets below. Restoration work on the old Steinway Building is already underway, and foundations are now being laid for the aforementioned 111 West 57th Street. JDS’ tower will reach 1,428 feet into the air, and SHoP’s design will complement and enhance the existing structure, echoing the Art Deco accents of 1920s New York with a facade clad in terra cotta, wrapped in ribbons of bronze. A few blocks to the south, the best emblem of NIMBY futility is also set to begin rising nearly a decade after it was initially proposed. Amanda Burden’s infamous and ill-advised decision to chop the top 200 feet off of 53 West 53rd Street resulted in a total height of 1,050 feet, which means the tower will now rank far below the buildings along 57th Street. But at least the Jean Nouvel building is finally under construction, with foundation work well underway. To the west, the most drastic changes relative to the baseline are taking place across the Hudson Yards. Last year, 10 Hudson Yards topped-out 895 feet above street level, and this year, three of its companions will also begin to rise. One block to the east, the first of the Manhattan West office towers will also be going up this year, on the corner of Ninth Avenue and West 30th Street. There, 1 Manhattan West will soon stand 995 feet to its pinnacle, and while the design may verge on mundane, filling in the formerly gaping hole above the railways leading into Penn Station will be crucial as the surrounding neighborhood transforms into a hub for office workers, residents, and tourists alike. The sole Downtown tower on the list is 175 Greenwich Street, which is already more than halfway to its future 1,070-foot peak. Like the office giants of the Hudson Yards, Three World Trade Center, as it is more commonly known, will be similarly transformative to the surrounding neighborhood, with a major retail component that will further the Financial District’s rapid evolution into a destination for shopping of all sorts.

It’s easy for rich NIMBYs to criticize these buildings for any number of reasons, but taken in sum, the positive changes each of these projects will effect on New York City will be enormous. From the jobs relating to their construction to the people who will eventually work and live in these towers, the fiscal gain to the city will also be significant.

But besides their intrinsic value, the extrinsic impact on the skyline will be equally huge. One World Trade Center will no longer be so lonely, 432 Park’s visual impact will soon be balanced by similarly-sized companions, and 10 Hudson Yards will stand as the shortest sibling amongst a quartet of giants.

Whether the NIMBYs like it or not, 2016 will mark the turning point in Manhattan’s history when supertalls became the new normal. If the skyline is a forest, these towers are the equivalent of redwoods, signifying increasing maturity, and most importantly, an expansion of opportunity for all the little humans in the forest below.